I want to thank Biqu for sending me there Pro Edition Delta for review.  As I always I try and give a totally fair review with the Good, the Bad and The UGLY!
Lets start with Biqu the company themselves. Biqu is one of the largest suppliers of 3d printer parts and electronics in the world. If you have a printer, there is a good chance some of, if not a lot, of the parts are from Biqu, just rebranded with OEM service. With that said it makes sense that Biqu started dropping their hat into the 3D printing world and the Biqu Pro is a great start!

Contents hide
1 Let’s start with The Biqu Kossel Pro Delta stats
2 Now let’s get into the nitty gritty….
3 Not Impressed With The Hotend Printer Cooler Combo..
4 Some DIY skills saved me
5 It was print time! (The dino was done with stock extruder)
6 Print after print it just worked..
7 So yes it wasn’t all gravy..
8 BIQU has very active reps on Facebook
9 Was The BIQU Delta just another kit from China?
10 Conclusion
10.1 PROS
10.2 CONS
10.3 Related 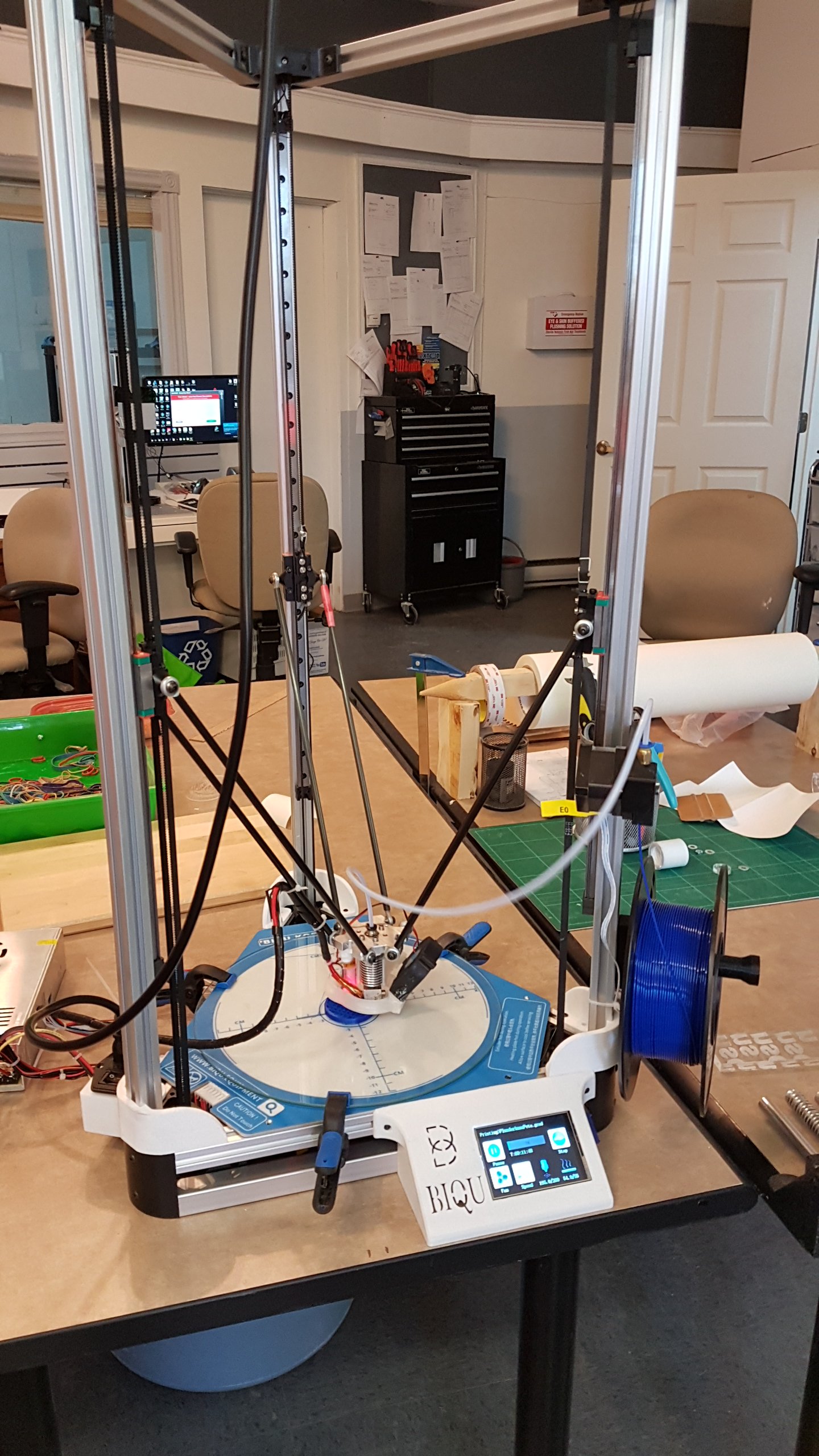 The Biqu Kossel Pro Delta is a large delta style printer with a 250mm base and a 350mm Z height. The Pro has linear rails, TMC2100 steppers, clone E3DV5/6 style hotend with an all metal extruder and comes with authentic BLTouch. The controller board is basically Biqu version of a MKS Gen board. You also get a color touch screen with SD card support. All parts are metal (like the effector which I was happy to see!) or are mold injected, except the hot end/print cooler (more on that in a bit) and the LCD cover. It also comes with a glass bed to print on, which is removable.

Now let’s get into the nitty gritty….

The Biqu Pro was packed very well, everything was labeled very nice and the instructions were very professional (a nice booklet printed on nice shiny thick paper). There were some single printed sheets for updated bits to construction. All the wires were terminated except the power cord (again more on that next.) I have to say I was very impressed right off the bat of the overall thought put into this printer kit. Right away it had a professional feel

It took me less than a few hours to complete the printer and I was getting very excited, as you could tell this was well thought out….then a few things came up.

to the whole kit, which I honestly wasn’t expecting.

First and foremost it came with no off and on switch, which I’m not sure about internationally but isn’t expectable in North America. It was just and US plug-in cord not terminated. This has changed as I let them know this needed in North American market.

Not Impressed With The Hotend Printer Cooler Combo..

Next was the hotend print cooler combo, this was junk and the print itself was horrible, which to be honest at this time wasn’t giving me a lot of confidence in the printer. This was an easy fix as Biqu has a great support page (this link Here) with a great community that had made a sweet circular cooler using a 50×15 blower fan.

Now the last thing to nitpick about is I wish they had added an usb cable extender to the board, as any time I wanted to update the firmware it was either leave a usb cord plug in coming out the bottom, or lift up the printer and plug it in.

Some DIY skills saved me

With that said I added a rocker switch and printed a box for it and added an usb extender myself. I had also in the end change the extruder to  the B’struder from thingiverse (Linked Here) this was a personal choice as the stock work great, I just love that extruder for deltas. I had also changed the heatbreak to a real E3D one as I find they turn any clone into a very good hot end.  The heat break from the stock was not good either. The heat break allowed the PTFE tube too far down in my opinion and was very close to the heater block, to the point I thought it was… The very small lip on the inside wasn’t the best and we can see many pushing the PTFE tube past that point. Once again an easy solution but want to be totally honest with any issue I’ve had.

Next I flashed the firmware and started auto level. There were a few issues in the beginning but once again he community to the rescue with a solid firmware and all was good! The firmware was great as I didn’t need to do anything but hit auto level on the lcd and then set my nozzle offset in Marlin. For those not familiar with editing a firmware you can also do this through gcode and a program like Pronterface, RepetierHost and you don’t need to be a rocket scientist or programmer, it pretty easy! 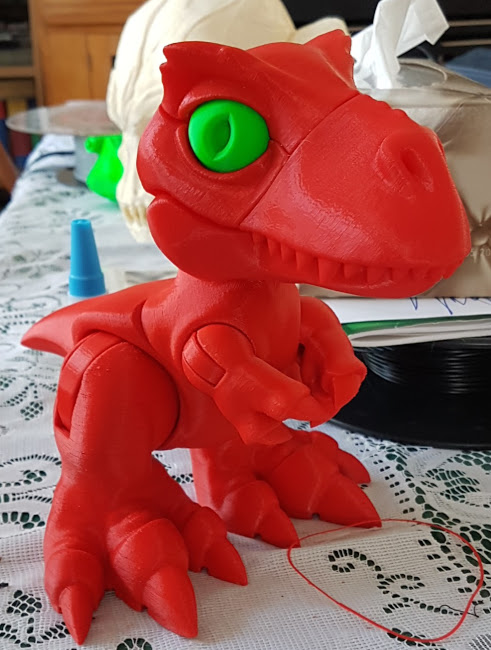 It was print time! (The dino was done with stock extruder)

So I did a few test prints to tweak retractions and then right off the bat wanted to get printing! So I printed the Boon Dino from 3Dkitbash for my son and it turned out amazing! Every piece fit great, the quality was great at 0.2mm layer height and I was printing at 80mm/s. To say I was super impressed was a understatement. Oh and did I mention how quiet this printer is…all you can hear are the fans and even then it probably one of the most quiet out of all my the printers that I have! I tried more than a few different types of materials, PLA, PETG APLA and all printed great! Now with like most Bowden systems Flexi isn’t the easiest and even sometime possible to print. ABS also wouldn’t be a great material for this printer as it’s open air and ABS really does need to be enclosed to print well without any issues (warping, shrinkage and such)

Print after print it just worked..

..with the Bltouch, every first layer was perfect. To the point I just hit start and didn’t look back, that’s how confident I was in this printer! Also having the BLTouch took away a lot of the headaches of configuring a delta printer. If you ever had to manual level a delta you know it can be somewhat of a pain, and I was very glad I didn’t have to through all of that!

I had this printer for over a month now and it never failed.  I trusted and love this printer so much that I knew a good buddy of mine who has full blown shop (printers, lasers and all the big toys) wanted a larger format printer. Right from the first print he was impress with the speed and quality and actually a customer came in and first thing they said was..”Wow that’s a lot faster than my printer!” He had a Tevo Tarantula.  There’s just something about watching a Delta style printer print. With its almost robotic and hypnotizing movement, it looks very futuristic. My friend is now using this printer professionally in shop and he loves it! 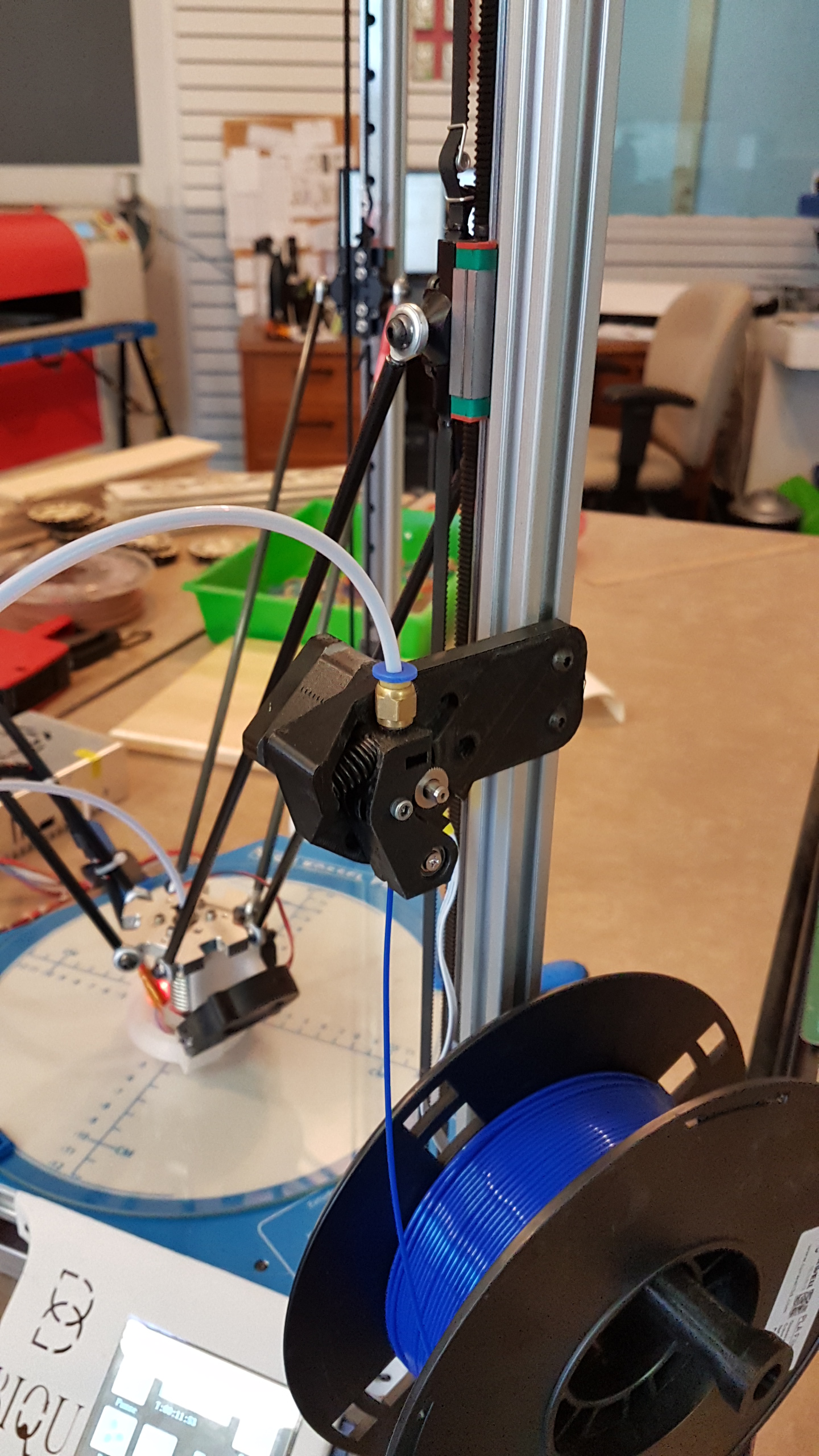 So yes it wasn’t all gravy..

But let me say that by the time you read this article, most if not all these issue have been fixed or corrected by Biqu. The only thing not change over all is the heatbreak , which to me is something minor but still would like to see a better quality one. Biqu does listen to their customers and want to have a community behind them. To the point when they had seen a post of mine how much I love BLTouch on the Pro, they contacted me for help with some firmware settings.

Something I was very impressed with was… well Biqu themselves. Their reps are very active on the Facebook page and they always answered any of my question or concerns and really do listen to the customers. I’m going to be honest, even though they did send me this printer for review I didn’t expect the great support I’ve seen them give their customers. You can tell they want to build a community that loves there brand, similar to what Wanhao, Tevo and other companies from China have done.

The Biqu Pro Delta with all it goodies is about $400ca shipped to your door. For a fast, accurate, quiet with linear rails printer you just can’t go wrong!

Was The BIQU Delta just another kit from China?

Going into this I honestly thought it was going to be. I’ve bought my fair share of cheap DIY kits from China/Aliexpress and 90% of the time they were more headaches then they were worth and all of them have been parted out to other printers. This was different but with some minor similarities. Even though Biqu is a massive parts supplier you can tell this was their entry into the 3D printer world. Now in all honestly they did it well and they are ahead of many companies when it comes to a well thought out product. You can tell they want to make a name for themselves and I can see their future printers being more refined, branded and high quality. (They have done this with their Magician Mini Delta printer, review coming.)

In the end if you’re looking for a low cost large format Delta style printer that is fast, accurate, quiet with a great community you can’t go wrong with Biqu Kossel Pro Delta.