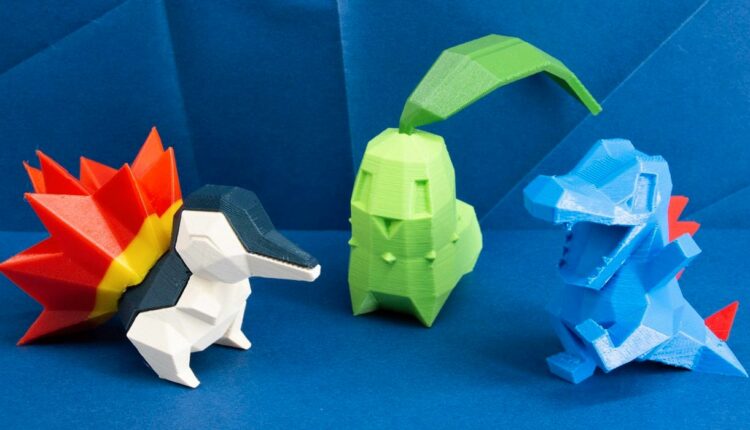 utilizing vivid colours and blocky designs to illustrate each species.

These designs are given a cute, blocky flare in the 3D prints for Johto’s starters and region-specific Pokémon,

allowing them to stand out among more detailed models.

such as the spherical Electric-type Voltorb, have remarkably simple forms, making recreations with mediums like clay or cloth quite simple.

The starters Cyndaquil, Chikorita, and Totodile

— as well as the area-exclusive Eeveelutions of Espeon and Umbreon

– are all found in the Johto region, which takes place in Generation Two of the Pokémon series.

The designs of Johto Pokémon are similar to those of Kanto species,

with Pokémon based on simple shapes and sharp colour shifts.

This was owing in part to the graphic capabilities of Pokémon Gold, Silver, and Crystal,

which were launched for the Game Boy Color at the time.

To be identifiable in the games,

these early Pokémon designs had to convert to pixelated sprites and depended on simple shapes and vivid colour contrasts.

With the help of a 3D printer and low-poly images,

The Pokémon lack the delicate features of their original appearances,

with Umbreon and Espeon having solid colours and no facial emotions,

and the Johto starters and evolutions having just spikes, flames, and petals changing colour.

An Avenue For Creativity

The printable’s simplicity doesn’t take away from their adorable,

familiar faces, and it may be the ideal way to add stylised Pokémon decorations to an office or bedroom.

Crochet patterns have also been used to reproduce Pokémon companions,

with some fans attempting to make one of each species while others opting to focus on particular favourites.
Exploring Pokémon designs through art is a terrific method for fans to communicate on forums and websites,

as well as share their love for the franchise outside of the console.

There are approximately 1,000 species to replicate across

the eight generations of Pokémon games, and many newer species from 3D-capable games have more sophisticated designs for a great aesthetic challenge.
While only the Generation Two Pokémon were included in this project,

more 3D printable Pokémon designs may be offered in the future.

Low-poly 3D printouts of Legendary and Mythical Pokémon would be particularly intriguing,

as the designs for some Legendary species,

such as Groudon, would be spectacular if scaled up.

With new species being added to each new Pokémon game, there will undoubtedly be lots of new ventures in the future.

3D printing or additive manufacturing has consistently created a space, such as the final fantasy landscape created mid 2021,

where passionate fans can express their creativity through 3dprinting and this trend is not about to change, with more innovation.