3D printing is becoming more popular to the general public. As we talk to friends and family about what we 3D print, they may not understand some of the terms that we use. To address this, I have developed a short lexicon on 3D printing terms. As a teacher I like teaching with analogies, so when possible I’ll include those as well.

verb: a. A process of manufacturing where a digital file is hopefully “printed” into a physical object. Imagine building an object a layer at a time from the ground up, like layers of cardboard.

b.A hobby that involves a lot of coffee, hope, engineering, and improvisations.

c. A quest to produce every physical object needed at home.

noun: Acrylonitrile butadiene styrene (ABS) (chemical formula (C8H8)x· (C4H6)y·(C3H3N)z) is a common thermoplastic polymer . It is one of the most common filaments used in desktop 3D printing. It is used in toys and industrial applications. If you print with this, be prepared for a toxic death smell from your 3D printer.

noun: a. the surface that the 3D printer builds the object on. This can be covered with a variety of media to encourage the filament to stick to it.

b.The surface that fails to support your print, causing you to look at online forums and beg for help from the 3D printing community.

acronym: Computer Aided Drafting: a. This is the digital program used to generate the digital files necessary for 3D printing.

b. Cannot Assemble Design: the same CAD program that will not do what you want it to, despite all your cursing and empty threats of computer destruction.

Glow in the dark filament.

b. The material that 3D printers hope works when they run it through their printer.

Fan / cooling: noun, adverb: a. The tool that cools the printing material after it exits the extruder.

b.The one setting you can never figure out get a bleeping decent print.

Extruder: noun: a. The tool head of the 3D printer that should extrude material for your object. Imagine a syringe that squirts out peanut butter.

c.The one part of your printer not covered under warranty.

b. Filaments that are twice as expensive and purchased on impulse while shopping online.

c.Filaments that will require additional materials to polish, rust or otherwise process for desired effect.

File: noun: a. Digital file that contains the g-code required to 3D print an object.

b. The digital file you spend hours making only to find out the POS will not 3D print because of a manifold error you never saw in CAD.

b. Both are the same term, though FDM is Trademarked by the 3D company Stratasys.

c. The most common form of desktop 3D printing. Imagine using a hot glue gun to lay down layers of melted plastic.

Hot End: noun: a. A parts of the extruder that heats up to the melting point of the filament.

b. Pro-tip, this part is hot enough to melt plastic and burn skin. It hurts. A lot.

Infill: noun: The amount of material that goes inside your print to support overhangs. 100% is results in a solid print, 0% is totally hollow.

Nozzle: noun: a. The brass part of the extruder that determines how detailed your prints can be.

b. The one part you hope never jams. If it does, your day is buggered.

PLA: acronym: a. Polylactic acid, (C3H4O2)n. This is the most common material used for 3D printing. It is biodegradable (in about a year). Made from corn starch or other food sources.

b. A popular plastic for beginning 3D printers, who find out it can warp and curl off build plates.

Print: noun: The object that is produced in 3D printing. See also: “What the hell happened” and “I just spent 15 hours on this for it to fail in the last 30 minutes!”

Print speed: adverb: a. How fast the extruder moves around the build plate. Measured in mm / second.

b. The one finicky setting you have to figure out for every different filament.

Retraction: verb: a. To bring the filament backwards in the extruder to prevent material waste while the extruder moves to a new position.

b. A setting that determines how often your extruder jams.

Resolution: adjective: a. How thick each layer of the print is. Resolution is measured in microns or mm. 300 micron (0.3mm) or more is a coarse quality print, while 100 micron (0.1 mm) is a fine quality print on most FDM type printers.

b. The one thing that customers don’t consider when they order a print from 3DHubs. PRO TIP: The finer the resolution, the more time it will take to print.

SLA: acronym: Stereolithography: A 3D printing process that used light and light-curable resins to produce a 3D print. While capable of printing in finer detail then FDM printers, the resins are messy and the printers require more technical skills to operate.

Slicer: noun:  a. The computer program that controls how the digital file is 3D printed on your printer.

b. The program that you will cuss at when the print goes bad due to mistakes the operator made.

b. The material you will spend considerable time removing from your print.

c. Material that loves to cut your fingers and eats up a lot of your filament.

What the ____: A phrase 3D printers will exclaim frequently when prints fail. Variations will include “WTF”, “How the hell did that happen”, “Oh shit, stop dam printer”. 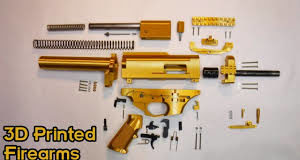