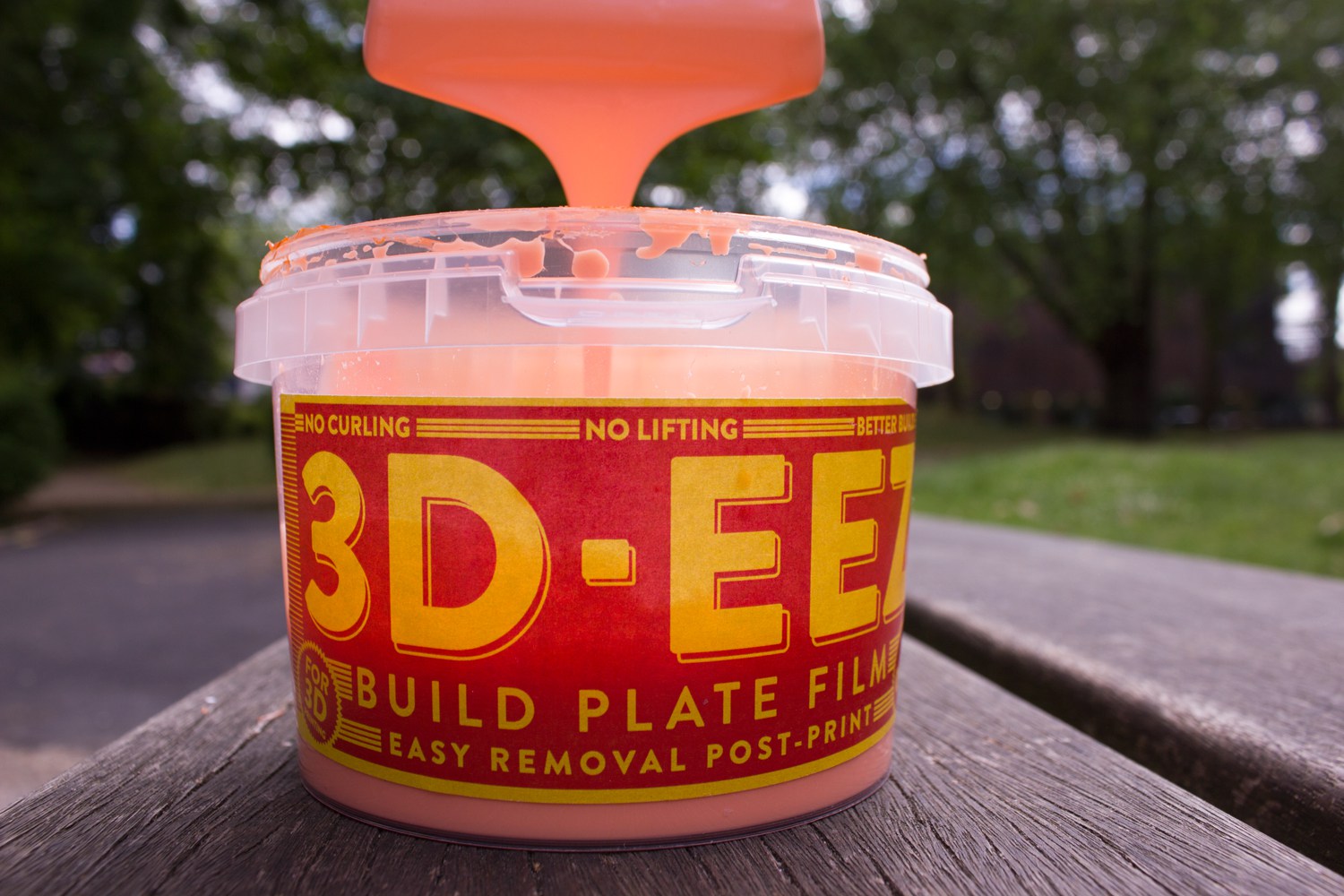 3D-eez is a build plate adhesion solution for FDM 3D Printers. However one aspect of this product that makes it stand out from the other vast methods of adhesion is that fact that it is applied as a paste and hardens to make a thin layer of film to help adhesion and it also protects your print bed. The paste comes in either a 0.1 L sample tube or in a 0.5 L tub, they both come with a foam applicator brush. Lets start with this 3D-eez Review.

Let’s start off with the application of the 3D-eez. I used the very helpful video tutorial from Andrew’s Workshop:

After I watched that tutorial I had a go at it using the foam brush straight from the 0.5 L tub, you are unable to do this with the 0.1L sample but I found that a nutella jar cap fits the brush perfectly and you can pour the 3D-eez into that. So you are supposed to put even thin layers of 3D-eez on a heated bed, then the 3D-eez turns clear then you add another 1-2 layers. The amount of layers you add depends on how strong or how difficult the material is to print.

Now usually I’m useless at this kind of stuff so I was a bit apprehensive and surely enough I mucked up the first try. It used hardly any of the 3D-eez and I let it harden then I scraped it up with a flat exacto blade. Surprisingly I got the hang of applying the 3D-eez on the second try and I have been getting better so now I can cover the whole print bed relativity easily. I applied it, ironically, to BuildTak as my BuildTak was badly damaged and was not working very well. I would recommend for most starting off just covering the middle of your build plate.

Over all the application is simple once you get the hang of it and watch the video a couple of times to see their technique. The foam applicator brush is very good for the job due to its long flat edge, one thing that I should say is not to leave the brush with any 3D-eez on it as the 3D-eez will harden over time and make your brush solid. I had this happen but I just soaked the brush in warm, soapy water in a jar overnight and rinsed it. I usually use 3 layers as it makes for good protection for the build plate and it makes it easier to remove over large surfaces, although you can use 2 if you are applying it in small areas.

The 3D-eez produces a smooth surface that is quite different to something like BuildTak or glass. The nice thing is that as well as being an adhesion solution the 3D-eez also serves as sacrificial protection for your build plate, this means that if your hot end is too low by accident the 3D-eez will take the damage and save your build plate. Most other solutions like BuildTak and tape do this but with 3D-eez you can just remove the damaged film with fresh film. The 0.5L tubs last for a long while if used properly so you can experiment with it a fair bit.

Calibration was a bit of a worry for me as you have to add on material onto the buildplate which would mess up the Z calibration. To my delight when I layered the 3D-eez properly I did not have to re-level my bed and I just had to adjust the screw on my Z endstop with using a sticky note. I found this to work well and the first layer came out very well,

The adhesion is outstanding, for testing I switch my Prusa i3 to 3D-eez as the build surface for a few weeks. All my prints, with my printer being calibrated properly, stuck to the build plate extremely well and as a result had no warping. PLA, unsurprisingly, printed easily and adhesion was brilliant and no warping. I use a 50°C heated bed with a 200°C extruder temperature. ABS also produced excellent result even with my heatbed that only reaches 80°C. I’ve had some serious warping issues in the past however the 3D-eez really grips onto the print and keeps it stuck down. This is not saying that you can print ABS without a heated bed as that is basically impossible on reasonably sized prints.

Now you maybe asking: How do you take these super-welded prints off the printbed?. Well I found that leaving the printer’s bed to cool to room temperature and them some to let the part cool fully I used my flat blade exacto knife to scrape under the edges of the print to remove it and it popped off. I found that once the 3D-eez was dried that it was hard enough to use a flat knife blade on it. It is also good here that you can replace the surface if you damage it with the knife, unlike other solutions.

So another vital part of 3D-eez is that you have to remove it. A tip I found is that if you use your flat exacto blade on the corner after the first print when the 3D-eez is softer you have an area to peel it off later on. The 3D-eez also ‘cooks’ after several prints, this can make it a bit harder to remove. When the 3D-eez isn’t that cooked it peels off into a soft film, this is useful if you want to print a big wide print that would not be easily removed. However after a few prints the 3D-eez turns much more brittle this is where that bit we pealed up a bit earlier helps to get the knife under and peal it up easier. The 3D-eez may flake up but it still is easy to remove it by scraping at it. This may be the only thing I can put 3D-eez down on a bit.

In this world of 3D-printing there are lots of solutions to keep your prints stuck down. This ranges from glass, tape and sheets to put down on your bed like BuildTak. These all vary in price a significantly. For a sample bottle of 3D-eez it cost £10, $10 or  €14 and for a 0.5L tub it would cost  £30, $30 or  €42. So it is much better value to go for the 0.5L tub rather than the 0.1 L bottle, however this all depends on how long the 3D-eez lasts. On the 3D-eez website it says that the 0.5L tub”Good for up to 100 builds”, I personally agree with this and more. I have been printing a lot and using 3D-eez and I don’t replace the film that often and I have used next to none of my tub so I think I would safely reach that and most likely beyond, but you may experience different results for yourself. However it is nice to see companies telling truthful figures for their products.

So what is 3D-eez like compared to other adhesion solutions such as glass or BuildTak. Lets look at the advantages : First of all there is the amazing adhesion which I personally I think is better than anything else I have tried which includes BuildTak. It also is replaceable so if you damage it you can just replace it unlike BuildTak of which mine is badly damaged to the point of not being usable. It also lasts a long time if you use it efficiently. However it is fair bit more expensive than sheets like BuildTak but the 3D-eez in my opinion makes up for that in the fact it can be replaced and that it lasts longer. Overall I think this is one of the best adhesion solutions on the market and I will be switching to it as my main build surface for both my printers. If you want to get some click here . 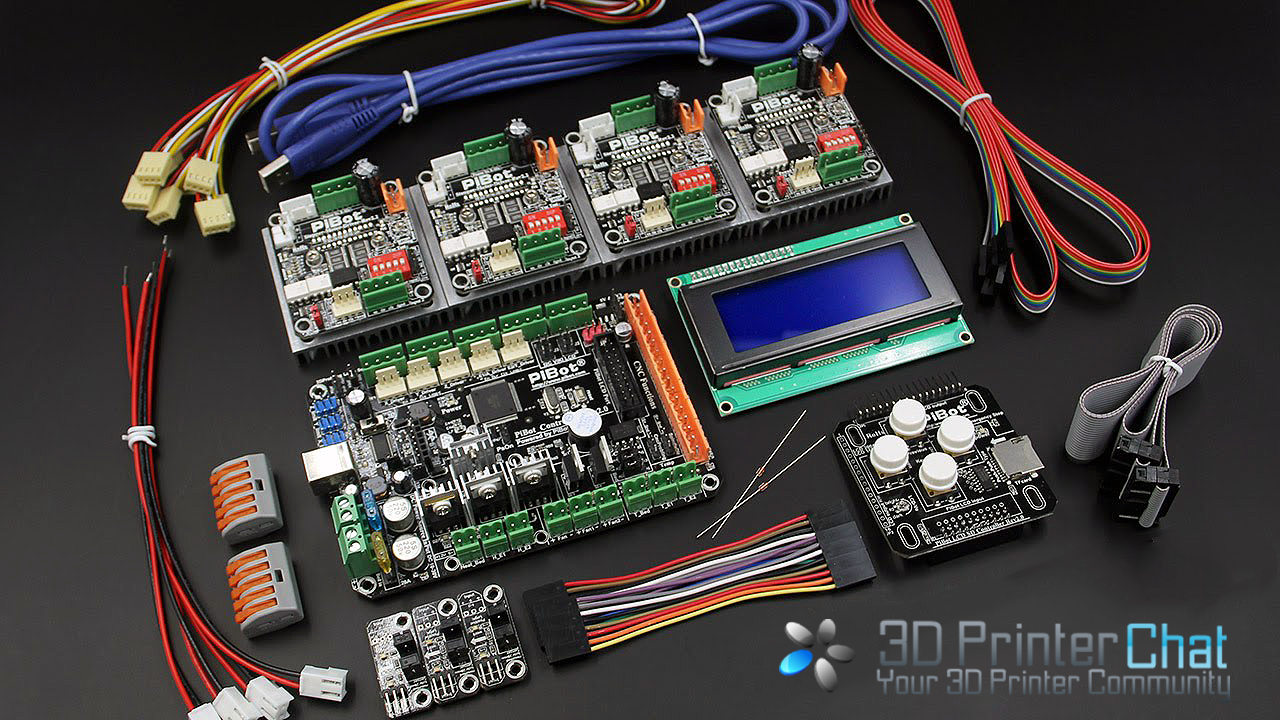