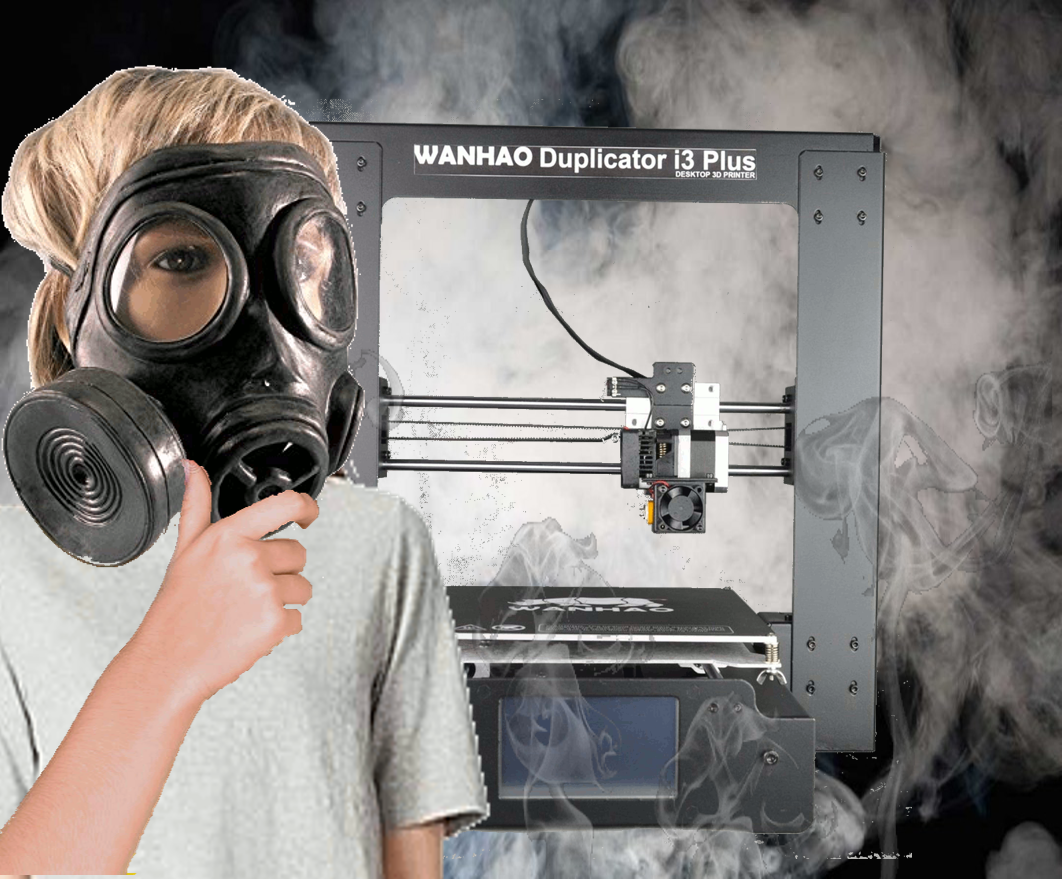 Ultrafine Particles and Fumes From 3D Printers: How Dangerous are They?

What You May Have Heard

Anyone that’s been active in the 3D printing community for very long has heard the stories. Children having trouble breathing or an asthma attack occurring after prolonged exposure to “toxic fumes” from a 3D printer. There are always alarmists surrounding new technology and 3D printers are not exempt. But how much of it is true? Two studies have been done regarding ultrafine particles (UFPs) and volatile organic compounds (VOCs) emissions from 3D printers. Students and staff from the Illinois Institute of Technology and The University of Texas conducted both studies. We’ll discuss their studies as well as the implications of what they discovered.

Four different 3D printers were used in testing: a FlashForge Creator, a Dremel 3D Idea Builder, an XYZprinting da Vinci 1.0, a Lulzbot Mini, and a Makerbot Replicator 2X. Each printer had different filaments tested on it according to their individual capabilities. The filaments tested included ABS, PLA, HIPS, nylon, polycarbonate, PCTPE, T-Glase, and a wood-fill filament. For each test an object was printed inside a chamber with a particle analyzer at the mouth of an exhaust port. Researchers used a 10x10x1 cm sample from the National Institute of Standards and Technology, pictured below. Ultrafine particles are any particle under 100 nano meters in diameter. As of yet there are no standards of law regarding this size of air pollutant. That means that unlike cars or lumber there is no regulation on emissions.  There is no testing required of 3D printer manufacturers to make sure their printers create a safe amount of UFPs. There is another problem though. Scientists do not yet know what safe amount of UFPs are. Studies are happening right now to determine what is and isn’t safe. Until then we as consumers will have to be vigilant and ensure that our printers are safe to use ourselves.

The data from the study shows that ABS produces around 3 orders of magnitude more UFPs than PLA. Let’s put these numbers into perspective. Cooking with high heat on a gas stove with no ventilation produces about 106 particles/cm3. PLA emits about 108 particles/cm3. ABS nearly doubles cooking in magnitude with about 1011 particles/cm3. The difference between cooking and 3D printing is that one doesn’t cook for 10 hours at a time over and over. The amount of UFPs given off over a week of 3D printing will be much greater than those given off over a week of cooking. 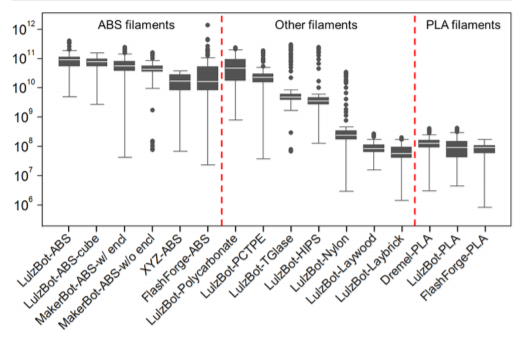 Now let’s examine the health risks of UFPs. Ultrafine particles are dangerous because they can be absorbed through the pulmonary alveolus and epidermis. They are most commonly known to cause respiratory related illnesses such as tracheitis, bronchitis, and asthma. More serious ailments such as cancer can sometimes develop as well. The severity of the potential problems caused by UFPs makes the study even more important.

The EPA defines VOCs as any gases given off by certain materials that can have an adverse affect on health. Paint, aerosol sprays, gasoline, cooking, photocopying, and much more all emit VOCs. There are thousands of household items that produce VOCs. Not all VOCs are harmful though. Many are completely safe. The specific chemical makeup of the compound as well as the level of exposure to it determines its toxicity. For example, ABS is far more toxic than PLA because ABS fumes consist mostly of styrene. Styrene vapor has a sharp, unpleasant smell which is what some people smell when printing ABS. All tests of ABS resulted in high concentrations of styrene. PLA on the other hand produces very low levels of mostly lactide. Scientists consider lactide non-toxic and relatively harmless.

Unlike UFPs, VOCs have been studied extensively. Scientists have a much better understanding of what they can do to a persons health. Effects may include nose and throat irritation, headaches, and kidney and liver damage. Cancer is also caused in animals but it is unclear whether human have the same reaction. The study shows that the three main chemicals in 3D printing VOCs are Lactide, Styrene, and Propylene Glycol. Of those three, researchers agree that only styrene is toxic. This shows that ABS is among the worst filaments to print regarding VOCs.

We now know that 3D printers do in fact produce both UFPs and VOCs. ABS is by far the worst in both categories. PLA had low numbers all around and HIPS, nylon, polycarbonate, PCTPE, T-Glase, and the wood-fill filament all fell in the middle. The emissions from 3D printers are harmful. You could become very sick under the right conditions. If you’re only printing PLA once a week then good ventilation would probably be adequate to protect yourself. For more toxic filaments or more active printers, an enclosure with a Hepa or carbon activated filter is a good idea. Many stores sell basic filters for under $20; a worthwhile investment into your own health.