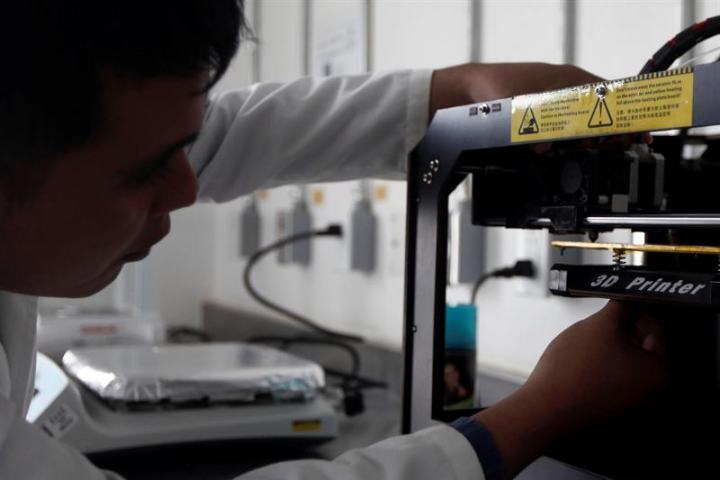 Students from Benemérita Universidad Autónoma de Puebla (BUAP) in Puebla, Mexico, made use of a 3D printing machine to create biocompatible bone implants from special material; this method is capable of regenerating bone tissue and could actually replace the use of existing alternatives.

To develop the technique, young researchers used computer algorithms to simulate the bone’s growth within the 3D printed scaffold; consequently, the team tested the method in lab rats and obtained a 100% of both functionality and resistance. Working on the project, Irving Fernandez Cervantes, who is a materials engineer at the Scientific Research Center in Yucatan (CICY), said:

But what really amazes me is the biocompatible nature of the composite material; A nanomaterial made of polylactic acid, hydroxyapatite and sodium alginate, which promotes the regeneration of bone cells by entering the body as bone fillings. This allows to think in designing by computer prosthetics with morphology of this tissue.

Finally, it takes the body a total of 28 days to absorb and regenerate bone’s tissue after implanting the material; The material has now two patents registered.

Composite material Implants could replace the use of metal implants

Its developers suggest the use of this technique instead of replacing with any other existing material that would inevitably deteriorate sooner or later. Unlike titanium, stainless steel or plastic prosthesis, synthetic bone implants contribute to the reproduction of the cells.

Similarly, the new method bases upon the patient’s own cells, so it almost eradicates the possibility of patient’s body rejection.

According to local statistics, at least in Mexico, the elderly population registers an exponential growth in the country; Hence the existence of a greater index of bone pathologies.

“Wear and loss of bone tissue through trauma or wear and tear have become a serious public health problem, as it mainly affects the economically active society….”

Explained the award-winning master’s student, Irving Fernández. As a matter of fact, femur and hip fractures are the most frequent health problems for the elderly population. Fortunately, bone implants with synthetic material could also become an alternative for any kind of fracture; even a third-degree one, where the bone’s integrity is compromised.

Ultrafine Particles and Fumes From 3D Printers: How Dangerous are They?