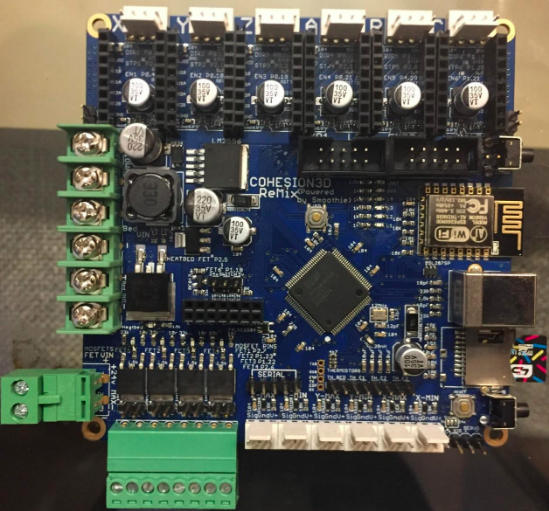 I had backed a Kickstarter a couple of years back called the Cobblebot and received the kit last year. The kit and instructions were abysmal to say the least; and looks like I was one of the lucky ones – that I was able to print using my kit. However, I set about modifying the kit, based on suggestions from the Cobblebot Google+ Community, as well as my designs.

While I had been slowly but steadily improving the mechanics of the printer, adding dual extruders, et al; I had ignored the electronics till now. I was still printing through the RAMPS + Arduino Mega that Cobblebot had provided. I had been thinking of upgrading to a 32-bit board and had done some preliminary research – narrowing down to a Smoothieware based system. While the documentation on the Smoothieware wiki is great, there was no step-by-step document that detailed out how to upgrade from Marlin / Repetier to Smoothieware; there was no way to find out which settings were to be transposed where. So.. here it is.

I also did some rudimentary testing pre- and post- upgrade to compare and see if the move is even worth it. TLDR – It is most definitely worth it.

The following is the current configuration: As I mentioned, I was among the lucky ones and was able to print from the kit, and had achieved good quality prints after all my modifications. However, I think I like to tinker with my printer, more than actually print with it

One of the few things that remained from the original kit was the electronics; and I had been thinking of upgrading to a 32-bit controller. Why? Just Because…

I chose to go with the Smoothieware based boards.

Smoothieware has a few good options for boards:

I chose to go for the Cohesion3D ReMix board; the board is currently available for pre-order and I was among the lucky ones that bagged one. It has had great reviews during the New York Maker Faire (2016) and you can ask Ray Kholodovsky if he still has one to spare. Even though I’m not an electronics engineer, I can say that the board is very well designed:

In this section I will explain the basic settings that need to be setup for your machine to function correctly; assuming one extruder and no heated bed. I will help setup extra extruders in a follow-up post.

Make changes to the file as below, copy it on a micro SD card and insert the card into the board before switching on. Smoothieware allows you to make changes to all settings simply by modifying this text file – you do not have to recompile the firmware like Marlin / Repetier. (It’s easier to compile Marlin and Repetier as they work in the Arduino IDE; Smoothieware, not so much; but you should never have to compile it from source)

Set the printable volume as follows:

Row Numbers for the default configuration files are in brackets

Steps per mm for all axes

Note steps per mm for all your axes in Marlin / Repetier; add them to smoothie config:

Thermistor and PID settings for hot-ends, you should start with the settings you currently have in Marlin / Repetier, however once you power on the board, you should do a PID autotune to get the best values. 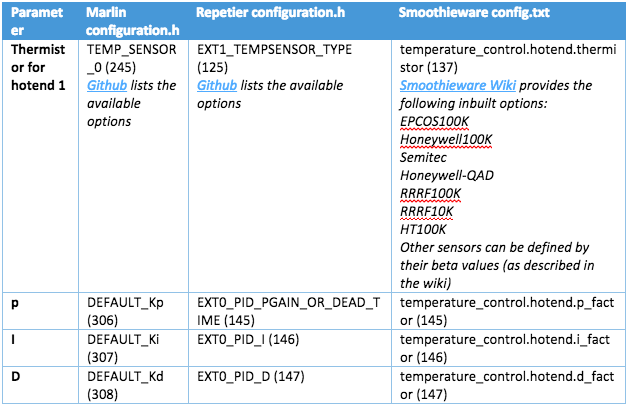 Ensure you add the following lines for all the hotends that you have. This should probably be in the default config file (and I almost missed it). Only realised that the safety features were not on when I switched on the heater without connecting the power supply. A typical marlin/repetier system will halt after a few seconds of trying to heat the hotend and not being able to do so. Smoothieware kept on trying to heat for many minutes.

The only thing you need to configure on the endstops is whether they are present or not. In most printers I’ve seen, there are 3 endstops, either all min, or some combination of min / max (one for each axis). 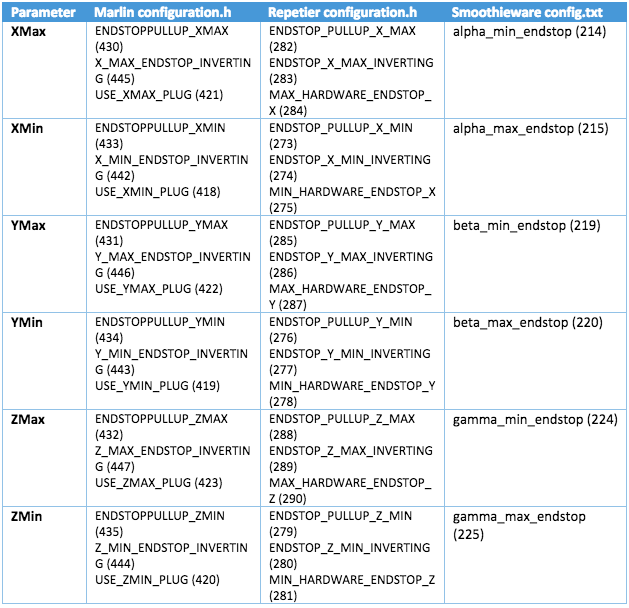 Setting up the endstops was the most confusing bit for me, but I think I have the conversion down: 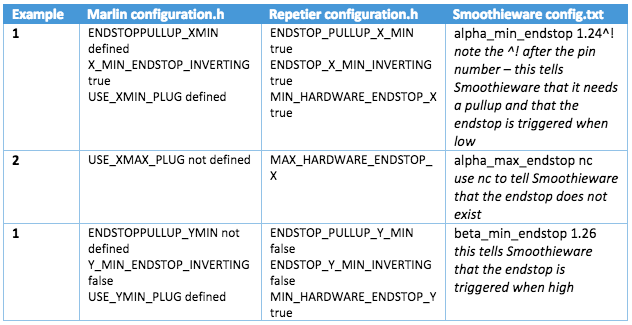 For the reprap discount LCD Panel, Simply set panel.enable (row 277) to true and uncomment (remove the # sign from front) rows 282-289

To use the kill button on the LCD Panel modify row 67 kill_button_pin to 2.11.

Moving from a RAMPS board to the Cohesion3D ReMix is not very difficult and is simply a matter of removing the wires from the RAMPS and putting them on the ReMix. 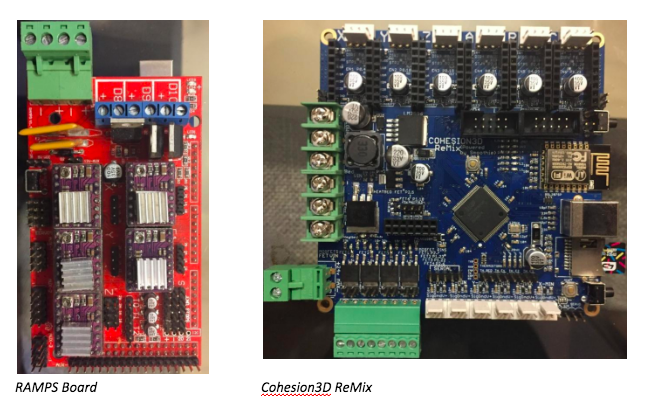 Disconnect drivers from RAMPS and connect them to the ReMix; would be best to keep the same drivers for the same axes. i.e. take the X-axis driver from the RAMPS and install it in the X-axis slot on the ReMix. This would ensure that you do not have to setup the current on the drivers again. 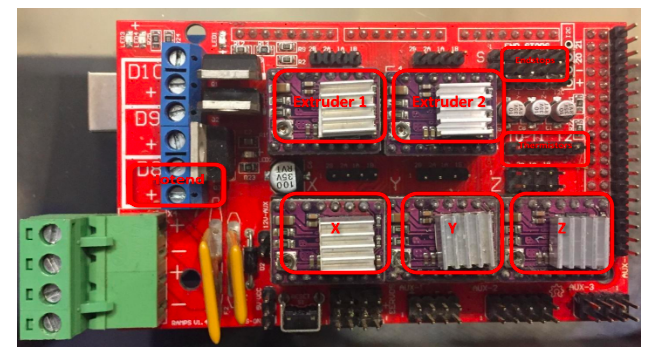 Connect the motors – make sure you mark the cables before taking them out, or you would have to test each axis to ensure that the correct motors are connected (I had to, as I was too eager to connect the motors ). If the motors run in the opposite direction from what you expected, simply reverse the connectors.

Connect LCD EXP1 and EXP2 to the board; Some LCDs may require the connectors to be reversed (mine did)

Connect the hotend heater to the first MOSFET on the bottom left (connects to pin 2.7) 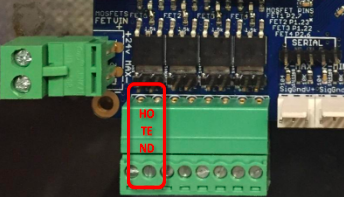 Connect the endstops as follows:

Re-check all the wires prior to powering up

First impressions, the movements are so “smooth” – with RAMPS there were jarring noises at corners; however, with Smoothie there are no sudden moves or places where things jar. With the RAMPS setup, I had missed steps on the Y axis, and had to pause the print, home and resume again to reset the positioning. Haven’t seen that with Smoothie till now. It’s early days yet, but I think investing in the new board was a good decision.

Before I upgraded, I decided to print “CALIBLOCK – Calibration Print Toy” http:www.thingiverse.com/thing:1090268  – with my RAMPS, so that I could test the same G-code once I upgraded. It was a 3½-hour print for two of the halves with 0.4 mm nozzle and 0.28mm layer height. The author challenges people to print one half in an hour; however, I tend to print slow, so I think three and a half hours for two was pretty good. The quality of the print with the RAMPS was pretty good – except for layer 5, where I had shifting in the Y direction. But otherwise, good quality – the pieces fit together with just the right snap, and the finish was smooth: 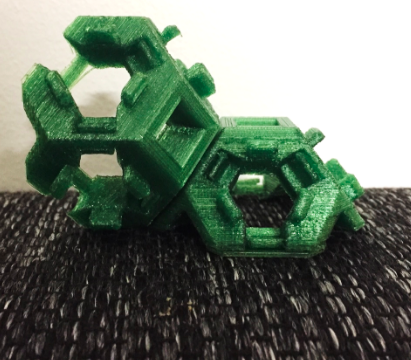 After upgrading, I printed the same G-Code with Smoothie, and as I had mentioned before, the movement of the axes was fluid and without any jarring noises. There was no layer shifting, and even the vibrations of the frame seemed low. 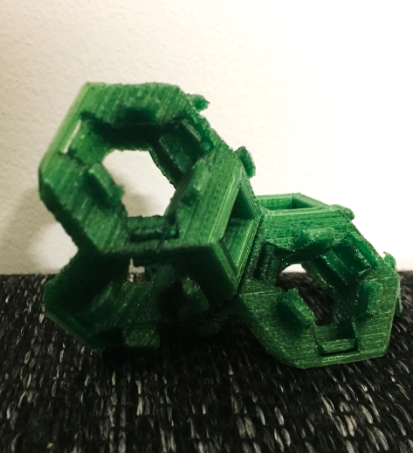 To be frank, I did not see too much of a difference in the actual print; but as I had mentioned, the movements seemed a lot more fluid.  I decided to print a tougher object with a higher resolution to see if I would get better results; though I don’t have a direct comparison in this case.  I decided to print a lithopane at 0.1mm resolution and the results were outstanding!! My earlier attempts at printing at 0.1mm were abysmal at the best. 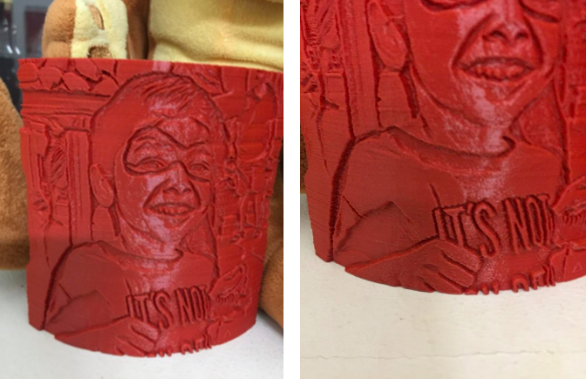 Overall, am happy with the print and my move to Smoothie.

Well, all is not rosy and there are a few things that I was used to in Marlin and Repetier that aren’t available here.