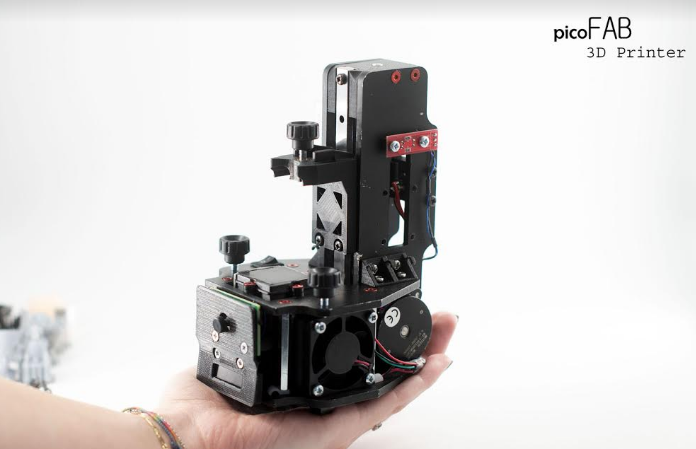 One would not expect exciting features at that price range but the innovative PicoFAB 3D printer promises the ability to create functional parts with exceptional detail along with a complete solution in 3D printing, cleaning, and curing.

The company sent out a press release in which the Lumi team explains that the new approach in design taken with the PicoFAB and its new compact engine makes the PicoFAB 3D printer very affordable and good for use in a wide range of applications.

Obviously, the small size of the printer limits the size of prints it can handle and also its ability for high-volume production but that is a willing trade-off for the price the printer comes in at. It is not just the price that makes the printer desirable, it also offers the benefits of affordability and fabrication of parts with high detail.

The PicoFAB 3D features a print volume of 24x24mm, 50mm height, 100um horizontal resolution, and 25-50um Z resolution. Both light shielding and air filtering are available, although the outer design is still undergoing final development as the printer will not be offered to the public for approximately another month.

With this latest Lumi PicoFAB 3D printer, research labs can experiment with more expensive resins since they only must use a small amount during testing (15-20ml). Jewelry designers can create rings, earrings, cufflinks, watches, and more. Nozzles, heatsinks, and other parts can be created. Designers can also create miniatures up to 50mm.

Dental labs can use the PicoFAB to their advantage in producing crowns and smaller bridges (up to four elements) with dental resins onsite:

“Using this 3D printer for small jobs allows the user to use expensive mills/3D printers for more complex jobs maximizing the efficiency of them,” says the Lumi team in their press release.

“The PicoFAB works with all 405nm commercial resins and curing time per layer can be as low as 3s for a 50um layer. An experimental version for 385nm resins is also being tested.”

Users can also purchase (at the same cost as PicoFAB) the picoCLEAN solution meant for both pre-cleaning and cleaning, with the following features:

PicoCURE is now also available for the post-curing of parts, allowing the user to choose the amount of time necessary and the mode. This system also comes with UV LEDs and a rotating base.

The team at Lumi says the PicoFab will be the focus of a Kickstarter campaign ‘within a month,’ and they will be making the printer available both in kit form or as an assembled product, with the accompanying products, PicoCLEAN and PicoCURE.

Lumi will also be offering other materials like resins for dental applications, casting, fabrication of functional parts and models, and more for cleaning.

Over the years Lumi Industries has continued to promote new developments and releases, mainly featuring DLP and LED 3D printing.

VSHAPER set to launch 5-AXIS 3D printer in May