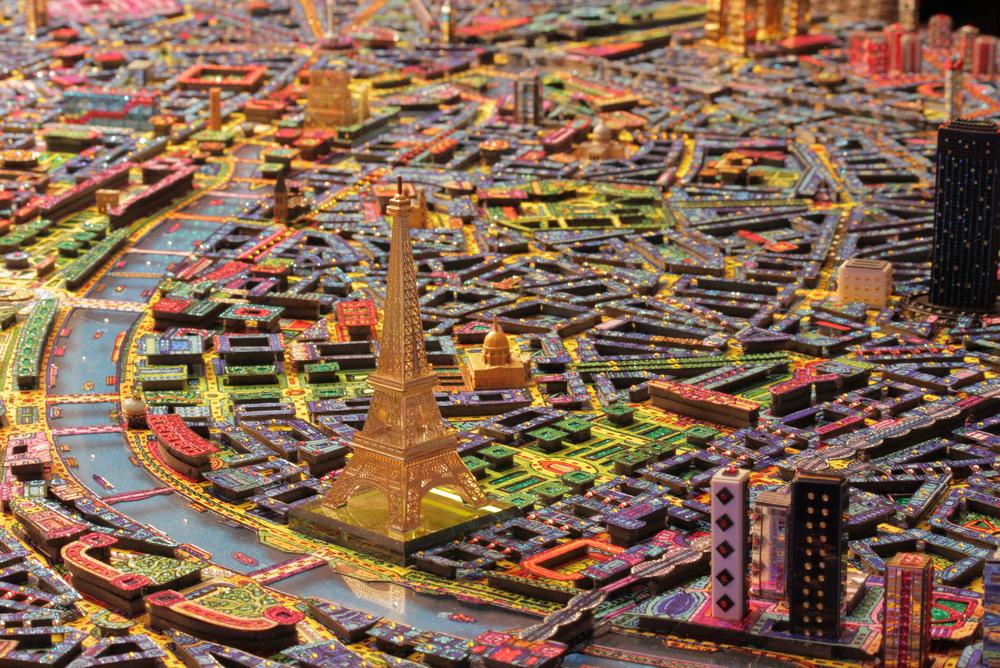 By Diana Segura Last updated Feb 4, 2020
1 226
Share
Contents hide
1 Artist Johann Perathoner presents ‘Paris 3D by night’
1.1 Born from the imagination of the artist (and Google Maps, of course), Paris 3D at night is the result of more than a year of work.
1.2 Related

French artist Johann Perathoner has unveiled his art work model in an exhibition on Paris among several public stages of the French capital, ‘Paris 3D by night’. In the corner of a street, near one of the great monuments of the city, people are bussy around two wooden easels.

What are you watching? A model of the city positioned horizontally. A small, elegant and colorful Paris that attracts passersby. Its name: Paris 3D at night, an art work realization by Perathoner.

Born from the imagination of the artist (and Google Maps, of course), Paris 3D at night is the result of more than a year of work.

It all starts with the drawing. In pencil, Johann Perathoner makes a replica of the city based on pictures and geographical data in order to place the main axes. Having ironed its black and white outline and erased the sketch, he scans and enlarges it to a scale of 1/7500 on a very thick barite paper. Then it’s time to cut the districts, trace the streets, create some buildings in relief with cardboard and others using a 3D printer.

If it is based on precise reference points for the structure of the city, the details themselves belong to it. Here a mosaic of Invaders, there is a drawing by M.Chat. The proportions lend themselves to the illusion, spilling overly large monuments or a larger Eiffel Tower, for the pleasure of playing. “We have to dive into the room, have fun with that, focusing more on one neighborhood than another,” says Johann Perathoner. Under the bright colors and the effects of the materials (rhinestones, gold leaves, mirror papers …) the city writhes in pop art. It is a Paris by night, more iconic in the eyes of the artist, where bluish darkness falls on the buildings and the boulevards light up little by little the yellow of their street lamps.

At 33, Johann Perathoner is far from beginning in creation. Fascinated by drawing, he’s been practicing it since childhood and now adds his second passion, cities. His multicolored views of Paris, mixtures of imagination and cartography, feed the interest of the Cartes d’Art editions, who publish his works on postcards when he was only 14 years old.

A decade later, the support changes, but the principle remains the same. With Paris 3D at night, capture the city as a model and inject affection. “When you look at work, the goal is to say:” Where do I live? “,” What do I know? “” Every street remembers a little memory, and it can make the moment magical, “says the artist.

What better approach, touching feelings more closely, than addressing Parisians and tourists? Johann Perathoner poses with his work at the Trocadero, in front of Notre Dame or the Eiffel Tower, in Montmartre … and faces tehir eyes, exchanges with them. Simply installed, his model attracts attention and generates a lot of enthusiasm: “It’s amazing!” “It was you who did it? Well played!”. But the operation involves risks. Wild exposure is not immune to police intervention or an overly expansive bystander. Never mind, these fears only add cachet to this miniature from Paris.

What to know more about 3D printing trends? take a look at our news section!

Falectra, the electric motorcycle prototype made with 3D printed parts