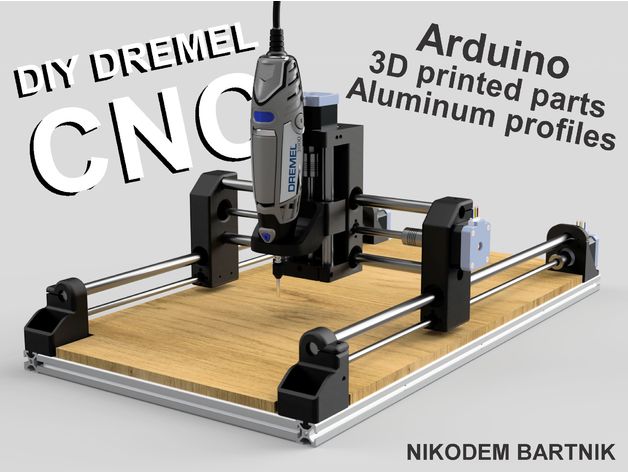 Contents hide
1 Build a cnc From the ashes of a dead printer.
2 DIY CNC
3 Conclusion

Build a cnc From the ashes of a dead printer.

I’ve decided to build a small but usable cnc out of stuff mostly sitting around my house. My prusa clone Franks died… again and has sat in my closet for a while. Sure It’s October and I could reanimate it with a replacement MKS board but I have a few other printers now. I already took the e3d titan extruder off it to put on my Ft5. So it’s off to order some parts and 3D print some others to complete a new cnc.

There are a lot of options out there for someone who wants a small cnc and most of them would cost less than the sum of the parts it will take to build this CNC. This build isn’t for everyone. If you want a good desktop CNC I would suggest something like the Seinci but if you are cheap or have a couple of dead printers lying around this build can come together very quickly.

This is a fantastic little CNC. Maybe you have a few parts lying around it can be built for almost nothing. If not it’s cheaper than other desktop options. In many ways better than most of the ones, you can buy from China. If you’re a maker in need of a quick to build a machine that can be adapted to use off the shelf bits and cutters. I would wholeheartedly suggest this. With that, there are some downsides. This machine will not be cutting steel and even aluminum will give it a fit unless you take extra care. If you need to make a buck for a mold or carve out some quick parts the machine can more than handle it. I will be building my own as soon as the few parts I don’t have to arrive and I might document the build.