Romina: the Mexican Galgo who has a brand new leg

Three-dimensional printing is a revolution in the way that we produce objects <<from the manufacturing of prototypes to products>>, including changes in the way we support social causes. A good example is the 3D printed leg as a prosthetic device,  this kind of projects involves community around the world and they always help.

The power of giving a prosthesis to someone who really needs it is magical as the kindness we once have felt for a puppy, a bird or a cat when we saw it for the first time. Because we all love animals. That’s why I’m really excited about what happened in my country, México. So let me tell you a little about Romina:

Romina it’s a Mexican Whippet Galgo who lost its front right leg on a lawn mover´s accident, (poor thing) and the left leg was seriously injured.

Imagine that your pet, your companion, your friend were to suffer in a similar way. I would definitely use my super 3D printing powers in order to help, and that´s what a group of researchers just did. 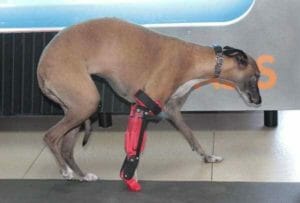 Universidad del Valle de México, university researchers decided to help Romina, they developed a 3D printed leg to replace her lost leg so she would be able to walk and run again.

They used a 3D scanner to design the prosthesis more precisely, so it could be tailored to Rominas injured leg. The 3D printed leg is made with silicon, but the final prosthesis is expected to be manufactured with aluminum or carbon fiber, it will be finished in a period of 3 months. Also, it might look similar to Rominas skin after being covered with a proper material.

In a press conference, the veterinarian who treated Romina said, that although the final cost of the prosthesis is not yet known, it´s expected to be cheaper than the commercial ones, by a large number of different materials amiable in 3D printing. The time of printing is about 24 hours’ time and it can be fully printed or assembled. Cool, isn’t it?

The orthopedist Beremiz Sanchez said that Romina had a reconstruction of their lost leg in Brazil, but the member had complication and muscle spasms, so they parents decide to try the 3D printing technology  and now Romina had a new leg according to her needs

Of course, Romina needs a lot of rehab, care, and love, to get used to his new leg, they need to work a lot so  Romina will feel comfortable and she can be able to play again sooner, The best about this is not only that Romina can walk again, is that this project is Open Source! so, if you are a veterinarian or a Maker and you want to collaborate, you can do it. With this, the project can live on, help a lot of animals and had a lot of feedback from all the 3D printing communities.

So, what are you waiting for?

Intro to unclogging your 3d printer nozzle part 2 of 2