Merging 3D printing and drone is an excellent coalition for tech enthusiasts. True to the fact, there are quite a few major projects and RC groups working on 3D printing drone. To accommodate for the complicated shapes and electronic circuits and motors, 3D printing rightly serves as a powerful tool. The drone applications range from rescue operations to ambitious interconnectedness. The 3D printing technologies used also vary from extrusion-based to powder-bed fusion methods. Here we discuss five captivating 3D printed drone projects. Needless to say there are a number of other significant 3D printed drones flying around the world.

CargoCopter is an interesting project aimed at revolutionizing aerial transportation system. It transports parcels up to 5 kg at 100+ kmph. The 3D printed drone is also capable of travelling up to a distance of 60 km. It makes a transition from hover to forward flight by combining multicopter wings. This enables the drone to resemble an airplane’s fast and efficient motion. Yet it is capable of vertically landing and taking off at a precision of less than 50 cm.

Local Motors is already well known for Strati, its 3D printed car. It teamed up with Mouser Electronics & Grant Imahara and developed Fly-Mode, an autonomous car with a quad-rotor drone that lands on the car’s rear deck. The car occupants can control the drone with a wireless joystick and center console’s navigation screen. The 3D printed drone is capable of scouting the landscape and pre-viewing the traffic ahead; but it can do more. Its sensor feedback is sent to a computer in the vehicle. The pneumatic levelers under occupants’ seats receive this data, and offer them a feel of flying with the drone. Fly-Mode’s inflatable screen also shows HD panoramic images from the drone, leading to a perfect immersion into flight simulation.

Team ROK from Japan developed a disaster relief drone after the Great East Japan Earthquake struck in March 2011. Yuki Ogasawara and Ryo Kumeda made their drone X VEIN for disaster conditions and search and rescue missions. It had an X-shaped body and lattice structure design resembling veined dragonfly wings. They also designed it with extensive safety features and better flight times. They intend to publish X VEIN as an open source platform for easy manufacturing and customization by others. It could also be modified to be used beyond rescue functions.

Blue Robotics is a fun project-turned-into-company story. The team wanted to send a solar powered robotic boat from Los Angeles to Hawaii, and stumbled upon the harsh reality of part unavailability. They wanted a thruster than can autonomously propel the drone underwater in salt water environment. The available ones were highly expensive and affordable ones were of and affordable ones of bad quality. Hence they set out to develop their own affordable and reliable thruster and ROV. Their Kickstarter campaign gained over $100,000 from 360 backers, and won a number of awards as well.

Svarmi is another passionate development of a hobby-turned-into-company story. Two mechanical engineers in Iceland interested in RC planes and drones started the company. With strong collaboration with partners, they develop drones for aerial and remote sensing and further data processing. Including different designs ranging from fixed wing to multirotor UAV, they cater to different applications in monitoring volcanic eruptions, vegetation, landslides etc. The technology offers huge scope in other parts of the world as well! 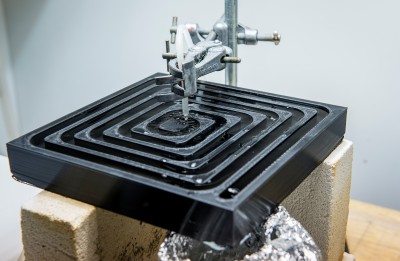