As saw in my previous posts about 3DPrinting in Brazil, you were able to see 3DPrinters that took the industrial part of this world to a new level. And about the hobbyists? I present to you: Stella

Today I’m going to interview Felipe Martins, one of the partners of Boa Impressão 3D:

Contents hide
1 Boa Impressão 3D Interview – With Felipe Martins
1.1 1) When did Boa Impressão 3D start? Where did the inspiration come from?
1.2 2) You only have one printer model, The Stella, then bet on a single segment outside the world of Graber’s and Prusa’s. How was this decision made? Is Stella based on some open source model? If so, which one?
1.3 3) What are the technical specifications of Stella? What materials are supported?
1.4 4) What are the challenges of manufacturing 3D printers in Brazil?
1.5 5) In the marketing section, do you have the “Stelleiro Print” project, how did you design it?
1.6 6) What is Boa Impressão 3D preparing for the future?
1.7 7) How big are you in the Brazilian market?
2 Conclusion:

1) When did Boa Impressão 3D start? Where did the inspiration come from?

In 2015 we participated in the Campus Party*, as the same campus, and we took our own printer that was set up as a hobby. However, at our table at the event was crowded with curious people and asking if we sold the model, so our printer was working 24hr per day on models that the participants wanted. Hence we saw that there was a market to be explored.

*Campus Party is the biggest technology&geek event that we have in Brazil, annually 8k people join at São Paulo for this event.

2) You only have one printer model, The Stella, then bet on a single segment outside the world of Graber’s and Prusa’s. How was this decision made? Is Stella based on some open source model? If so, which one?

When we decided to create the company we set out to spread the 3D printing culture in Brazil. However, we saw that in the market did not use 3D printers that met the requirements of low price, easy use, and support. That’s why we bet Stella, a model totally redesigned by us from the Smartrap* project, focusing on being the first (second, third …) 3D printer of the people.

*The Smartrap mini is a new design of a RepRap 3D printer. It is inspired by the (outdated) Wallace model, which is itself inspired by the Printrbot, designed by Brook Drumm. (Font: RepRapWiki)

3) What are the technical specifications of Stella? What materials are supported?

Stella prints on PLA, PETG, Wood, Flexible (TPU), Nylon and several others that do not need a heated table. It has a print area of 20x20x20cm and allows to make layers of 0.05mm, which makes Stella the 3D printer with best cost-benefit of the segment.

4) What are the challenges of manufacturing 3D printers in Brazil?

All, haha. It is practically prohibitive to build an industry from scratch in Brazil. This is due to the bureaucracy and lack of suppliers to manufacturing. It really was very complicated to do the regulation for import, I believe it took a year of regulation. Sometimes we had to stop production for lack of parts that did not arrive. Fortunately, we have managed to overcome all challenges.

5) In the marketing section, do you have the “Stelleiro Print” project, how did you design it?

Our big challenge in marketing was to show how good the printer is even costing half the price of competitors. So we asked the Stelleiros to send pictures of their prints showing the capacity of the printer. Sometimes we were even impressed with their work.

6) What is Boa Impressão 3D preparing for the future?

We are in a moment of expansion of the company, we will increase our production line to shorten the waiting queue.

7) How big are you in the Brazilian market?

Today we already have Stelleiros in all the states Brazil with majority in São Paulo and Curitiba and we also have quite large exports.

On Brazilian market, Stella is the cheapest 3DPrinter that we have. It is a good choice for people that want to start in the 3DPrinting World. However, it’s a great print to learn. Since it took the RepRap vow to the origin: Auto-Replicant 3DPrinters. Most of the parts of Stella are 3DPrinted so you will learn how the electronics work, how to do maintenance and so on.

Also, Stella isn’t a common model, since isn’t based on Graber and Prusa projects. But even been an outside model, you can see the photos the quality that you can achieve with this 3dprinter.

Let me know in the comments below what do you think about this printer and this company!

Check out my previous interview about Brazilian projects here. 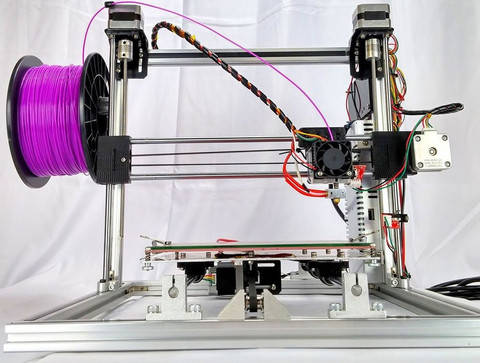 Finding the right printer for you.