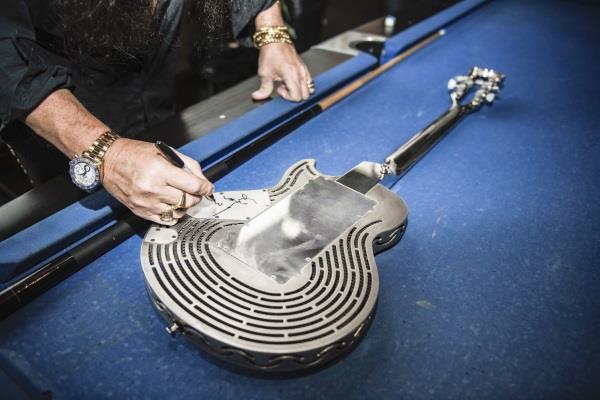 Swedish engineering group Sandvik has demonstrated its advanced production techniques in a very original way. Knowing that guitar smashing is a legendary practice, the firm defied the impossible and created the first smash-proof 3D printed guitar in the world. Best part? They challenged guitar player and smasher Yngwie Malmsteen to try it!

“We don’t make products for consumers, so people don’t realize how far in the forefront our methods are.” said Klas Forsström, President of Sandvik Machining Solutions. “Creating a smash-proof guitar for a demanding musician like Malmsteen highlights the capabilities we bring to all complex manufacturing challenges.”

In order to put its resistance to test, Sandvik challenged Swedish rock legend Yngwie Malmsteen to break it. The next film shows Malmsteen trying to destroy the guitar in front of a crowd in a rock club outside Miami:

“This guitar is a beast! Sandvik is obviously on top of their game. They put the work in, they do their hours, I can relate to that,” Malmsteen said. “The result is amazing. I gave everything I had, but it was impossible to smash.”

Behind of the smash proof design

Sandvik engineers got help from renowned guitar designer Andy Holt, of Drewman Guitars so they would Malmsteen’s exacting musical standards and his lightning-fast playing style. Before building stage, Sandvik employed the same simulation processes that car makers use to digitally test vehicles for crashing.

“We’ve had to innovate from the top down. There’s not a single part of this guitar that has been made before. It’s a piece of art, really”, points out Holt.

The instrument has a titanium body 3D printed with Direct Metal Laser Sintering (DMLS) technology. In fact, each layer of the smash proof guitar body is thinner than a human hair. On the other hand, the guitar’s neck and fretboard were manufactured with hyper-duplex steel technology. Sandvik actually used a solid block of recycled stainless steel for these.

Then, guitar’s volume knobs and tailpiece which anchors the strings, were created using 3D printing. But even more incredible is the back of the guitar’s neck, which is hollowed out from the inside and is only 1mm thick in places!

“Additive manufacturing allows us to build highly complex designs in small production runs. It lets us create lighter, stronger and more flexible components with internal structures that would be impossible to mill traditionally. And it is more sustainable because you only use the material you need for the component, minimising waste.”

Thyssenkrupp to open an Additive Manufacturing TechCenter Hub in Singapore