Within the BB-8 Builders Club

I’ve had my Makergear M2 for over 4 years now. It’s been a great ride, and we’ve had a lot of fun together. Among the numerous projects I’ve made or been part of, I though I’d tell you a little about one of the bigger ones, that are still a work in progress.

Since September 2015 (Yes, before Star Wars: The Force Awakens came out), I’ve been working on and off of a full scale version of BB-8, that little rolling ball droid from said film.

At first, when the sneak trailers came out, I was not a big fan. “Looks CGI, looks fake” was my (unedcated) opinion. That is, up until we all saw that little adorable droid roll out on stage at Celebration in Anaheim. The internet exploded then and there with adoration for BB-8.

At that very same convention, the BB-8 Builders group formed, and I was quick to join in, in fact, I became one of the club administrators fairly quick.

One of the things that the club started out to do, was to model BB-8 fully in 3d, based on reference pictures and size comparisons with known items, such as R2-D2. (I’m also a member of the R2-D2 Builders club with a fully radio controlled replica of R2, but more on that another time.)

Not before long we had a working 3d model, where club members were given access to .stl files of BB-8’s dome to begin with, but a little later, also the body.

Having a body circumference of slightly above 50 cm, printing BB-8 is a momentous task. The dome alone (which measures slightly less than 30 cm across) took me about 60+ hours to print… but .. the body?

Armed with the .stl files, skillfully modelled by Tiny Panganiban, I set out to beta test printing the body of BB-8… was I in over my head?

The body, the sphere of BB-8

..consists of 8 triangular parts and 6 circles. Each circle consists of 6 parts, and each triangle consists of 3 parts. 60 parts that all have to be 3d printed, that needs to be glued together and finally mounted on something… and fit within tolerances!

I already knew that in my world, ABS printing is not an option due to lack of proper ventilation and printer enclosure, so PLA was the way to go.

The parts also have to be able to withstand a good sanding, since I did not want my finished droid to have any visible print lines, and the guesstimated weight of the final droid was anywhere between 30-50 kg. All of which would have contact with the floor on one small point on the sphere.

I printed all my parts on my M2 using 6 perimeters and 25-30% honeycomb infill. Since most of the parts were orientated standing up, a lot of testing was done on how to make sure they adhere properly. We went anywhere from adding helper disks in the corners to adding a 10 perimeter wide brim connected to the part in question (0 mm distance).

Using 10 perimeters turned out to be a great option. The contact surface against my build platform, which during the print phase varied from standard boroscillate with a Polish hair spray that my mother in law had brought with her from Poland to keep here, to BuildTak when I wanted to minimized time between parts. 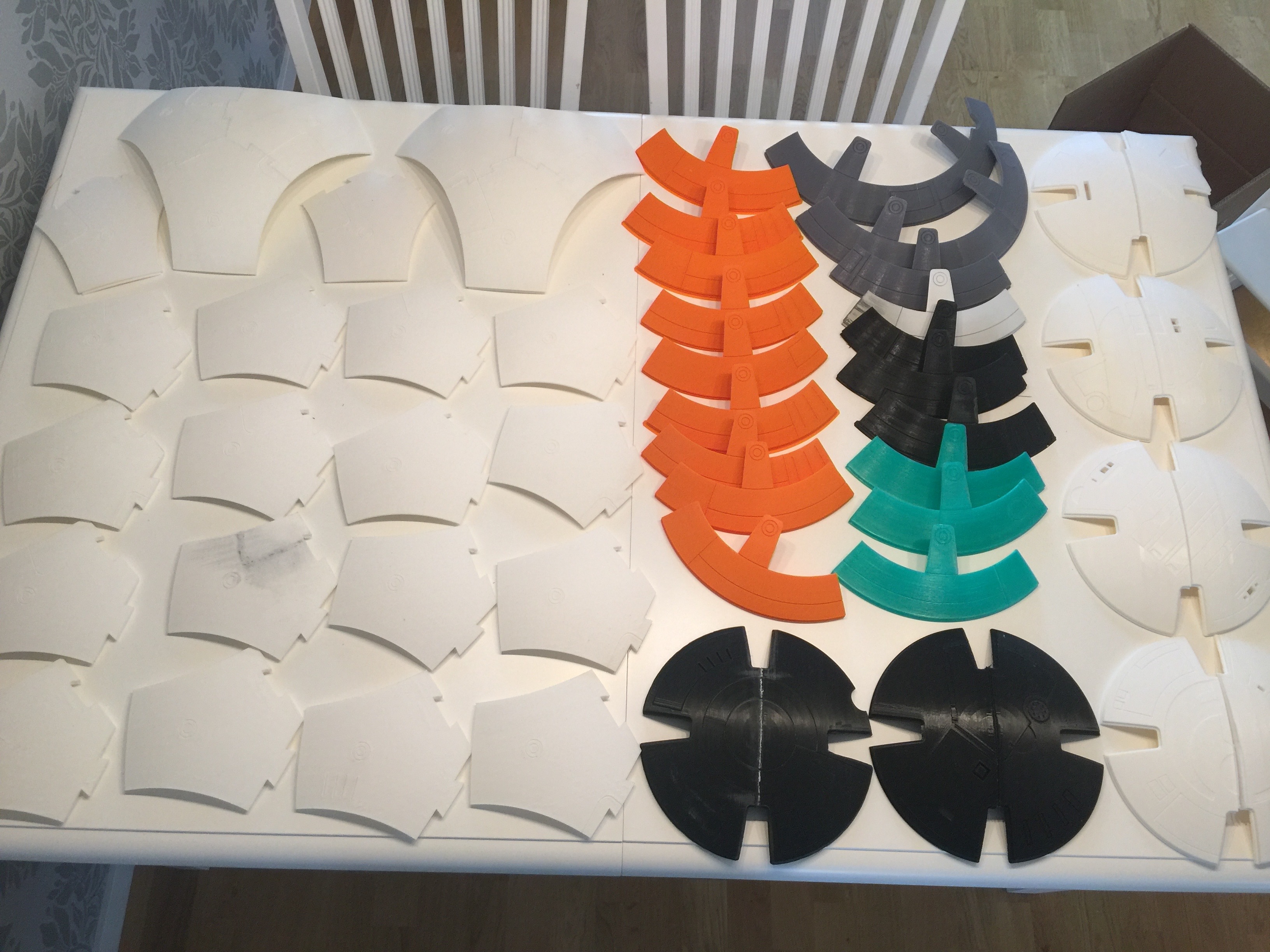 ..as adhesive has worked very well for me in the past, but it does have one big draw back: I need to wait for the build plate to cool for the part to snap off. trying to remove it while the build plate is still (too) warm, only makes the hair spray to either stick too much, or stick to the mode, making the build plate uneven. This might not be a big issue, but when you are using a 6mm thick MIC-6 extruded aluminium build plate to minimize any warping on the plate, it does take a while for it to cool down.. and to warm up for that matter, so I wanted to try other options.

Buildtak was among those things I worked with, and not counting the first few sheets that was ruined due to the model sticking too firmly to the surface, I got the process working smooth, and I dared to start longer prints, with as much as 8 parts for triangles printing at the same time.

This involved print times up to 30-40 hours (sometimes more), and I always made sure I had enough PLA in my roll, and I only had a very few big prints fail on me.

Modding the 3D Printer for The BB-8

Of course, while being engulfed in the big print job, I could not stop myself from doing a few upgrades on my printer. I added automatic bed tramming, rerouted most of the cabling and started working on adding cable chains to my M2. Mostly, these changes came from something happening, such as my then 2 year old cables started to show signs of wear and tear from being slightly bent back and forth more or less in the same place for thousands of hours of printing, and once a cable or connector started to show signs of wearing down, I tried not only to fix the issue, but also prevent it from happening again.

Now, I run my printer only as a hobby. I take on the occasional small print job from 3dhubs or helping friends with their cosplay projects when I have time, but I could “afford” down time on my printer. 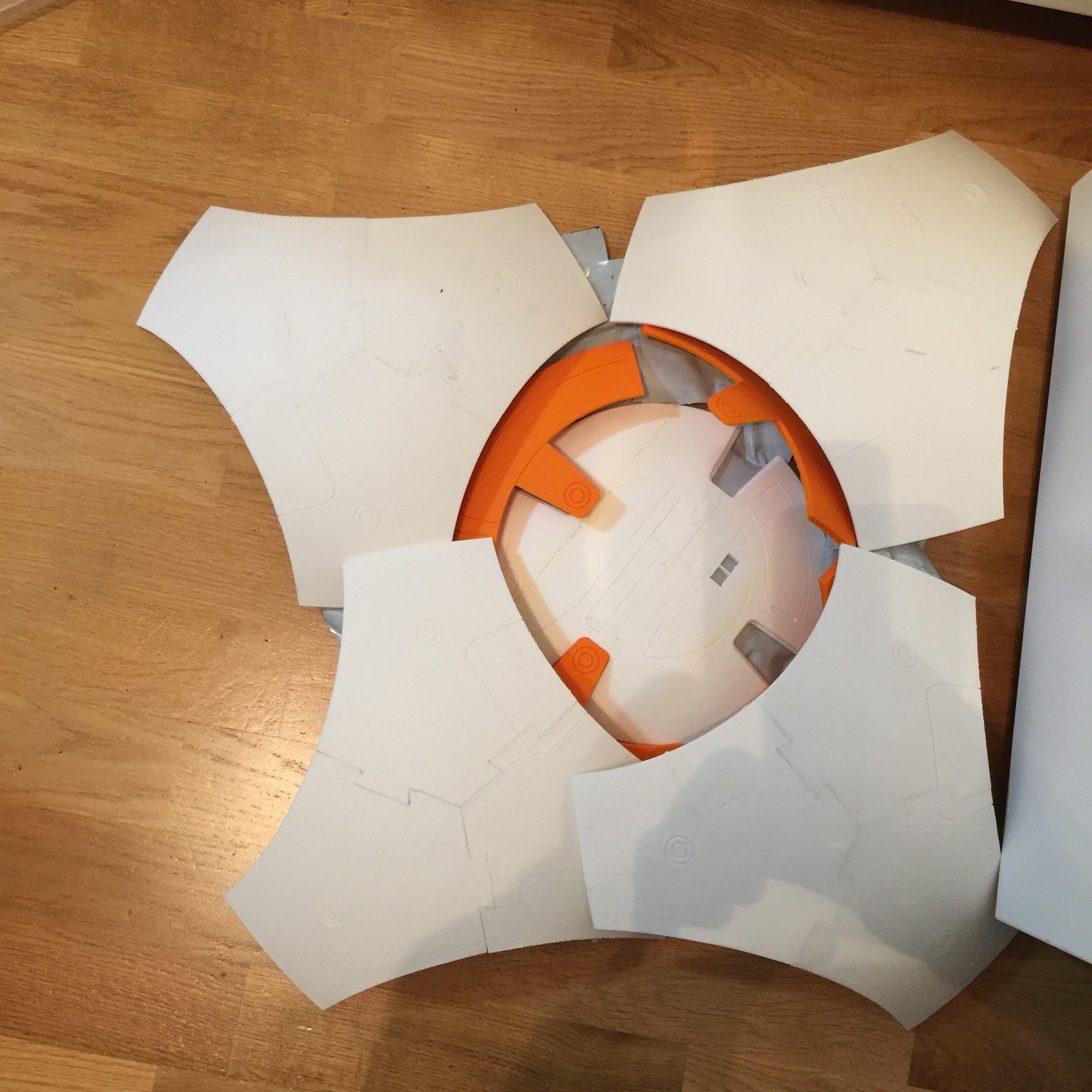 It wasn’t until I realized I was about 75% done (some 450 hours in) that I realized I had a shot at completing my BB-8 before Comic Con Stockholm, which was about one month before the opening of “The Force Awakens”, and the idea of exhibiting my fully 3d printed droid started to really appeal to me.

Once all the parts was printed, I started gluing triangle parts together, and quite frequently, also my fingers. Not before long, I had 8 triangle pieces and 6 circular pieces all laid out and ready.

There definitely spots here and there that could need a little more TLC, but that was nothing an orbital sander, some friction welding and additional bondo couldn’t clear up.

I estimate I spent about 150 hours all in all finishing up the pieces. Sanding. Bondoing. Sanding again. Pouring PLA dust out of my shoes. Painting. Sanding … All this in what seemed an endless loop. I spent all time I could on the balcony (when it wasn’t raining) to get this done. Finally I was ready for the last paint step: Clearcoating. 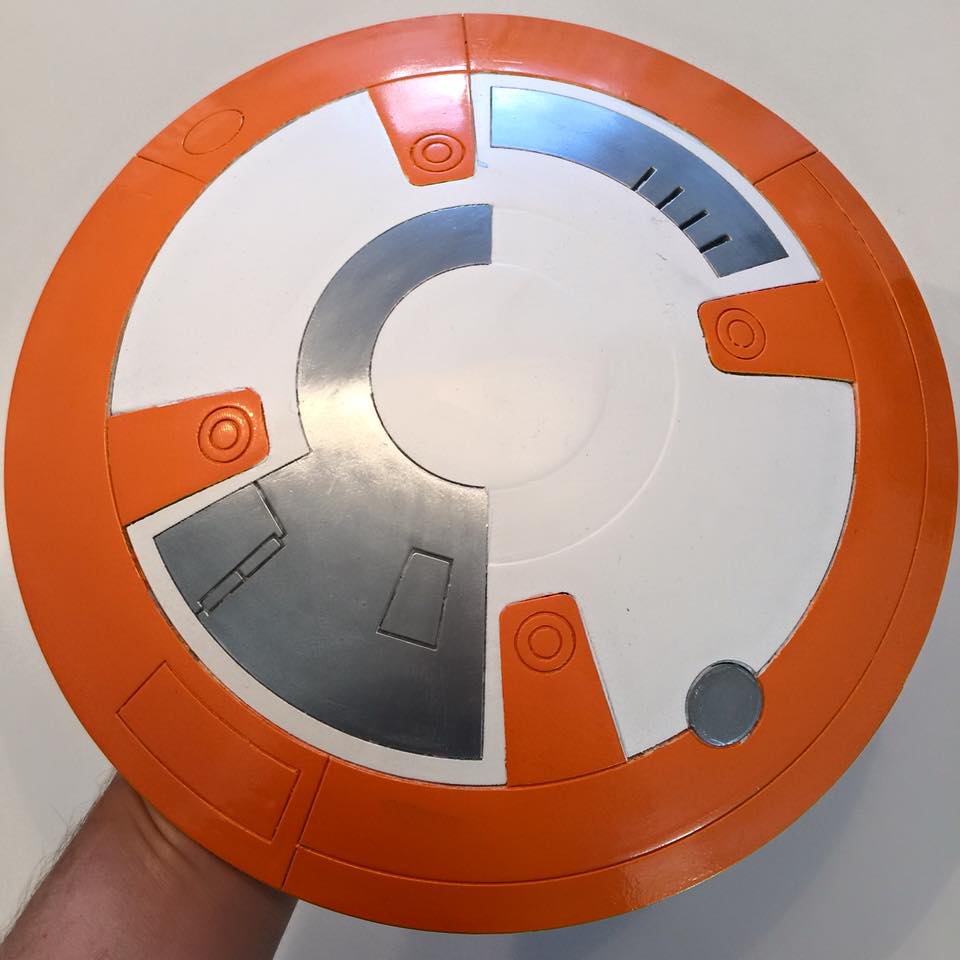 Ok, first off, I needed to add the metal look to the round panels, something I had planned to do with Silver Leaf Rub and Buff, something I’ve used to great extend before and gives great result, except… it turns out it didn’t stick well on clear coated surfaces.

So, it was back to masking off the parts that should be painted, gently rubbing with sand paper again, cursing under my mouth as I thought I was way past this tedious step before I could finally apply the wax-like putty on to the panels. Comic Con was right around the corner.

The same night, I decided to try and glue the lose shell parts together using CA glue. I say try, but I ultimately did it, emptying my entire stock.

I figured i’d just superglue them together for now to hold them in place to last these forthcoming events and figure out a way to mount them properly later on. This was done 2 nights before Comic Con.

comic Con was spent weathering the droid live on the R2-Builders booth, and BB went from being really dirty after the first run, then having the weathering toned down on day two, and finally toned down further on day 3.

The first 3d printed BB-8 replica built with the files within the BB-8 Builders club. (I did have access to our beta files after all)

BB-8 had a glorious convention, only to be followed up by another Sci-Fi convention where he helped raise money for charity by posing for pictures together with the Nordic Legions (Nordic countries have a joint 501st charter and work closely with the Rebel Legion which is also spanning the Nordic countries), up until the evening of the Gala premiere, where he was supposed to mingle with celebrities and appear in pictures in the papers….

… that is, up until a woman from the event company decided he needed to be moved from the red carpet.. only to drop BB-8 and all the temporarily CA glued joints collapsed…. completely…