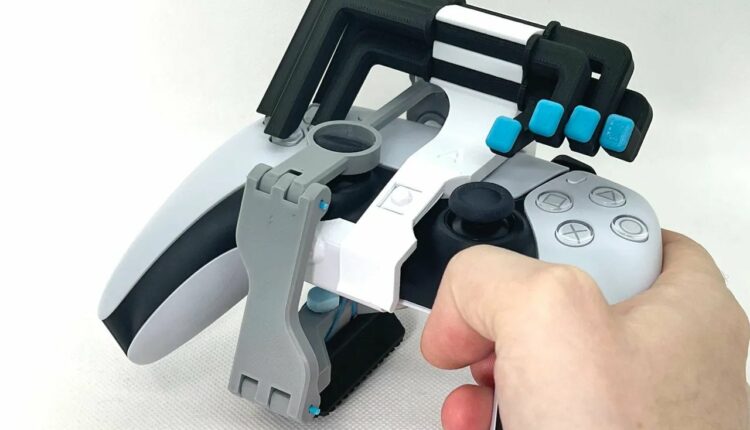 A 3D printed adaptor for the PS5 DualSense controller has been built by a YouTuber, allowing users to play games one-handed.

tinkering controller The controller was designed by Akaki Kuumeri as part of The Controller Project,

more accessible to those with physical disabilities,

allowing users to access all of the controller’s key capabilities using just the right-hand side.

Anyone who wants to make their adaptor can download and 3D print the open-source design,

which has already gotten positive feedback from users on the disabled gamers subreddit.

While Kuumeri’s DualSense controller adaptor is an innovative technique

that has the potential to make gaming more accessible to a wider range of people,

a veteran of Hack-a-Day, built and 3D printed a unique gaming assist in 2013

that mimicked keyboard presses and mouse clicks and made these functionalities

available via individual switches on a repositionable lap-board.

which was developed for a gamer with muscular dystrophy.
Kraft grew the idea into The Controller Project,

such as bespoke Xbox thumbsticks and 3D printed foot controllers.

to be showcased through its newest competition,

converting it into a fully working flight stick.

While advances like Microsoft’s Xbox Adaptive Controller are bringing more attention to the accessibility of video gameplay,

Sony has yet to offer an officially accessible equivalent to its PS5 DualSense controller.

Some users claim that the DualSense is difficult to use due to its bulky size and weight,

analog stick from any surface,

even a player’s thigh,

which should provide support and reduce fatigue to the hand utilized.
The attachment attaches to the left analogue stick of the controller and allows players to

move the analogue stick by balancing the controller on the surface and moving the complete controller.

The shoulder buttons have been relocated to the opposite side,

so players can press all four with their index fingers. The buttons are positioned such that you may press L2 and R2 at the same time,

which is essential in many games.

A second 3D printed adaptor may be added to the controller to allow users to control the arrow buttons,

giving them complete control over the controller’s keys.

Except for the sharing button, the two adaptors allow players to operate the DualSense controller entirely with one hand.
The adaptors can be inverted to fit onto the other side of the controller

due to the DualSense’s symmetry by mirroring the components’ design files before printing.

or have a mid-game snack without pausing the game.

Except for the controller’s stand, which was printed in a flexible TPU to provide greater grip,

Kuumeri 3D printed each piece of the adaptors without support in PLA.

With £250,000 in expansion funds, EVO 3D enters the Evolution sales and marketing arena.

With £250,000 in expansion funds, EVO 3D enters the Evolution sales and marketing…

Cheaper 3D Screens For your TV or cracked Smartphones