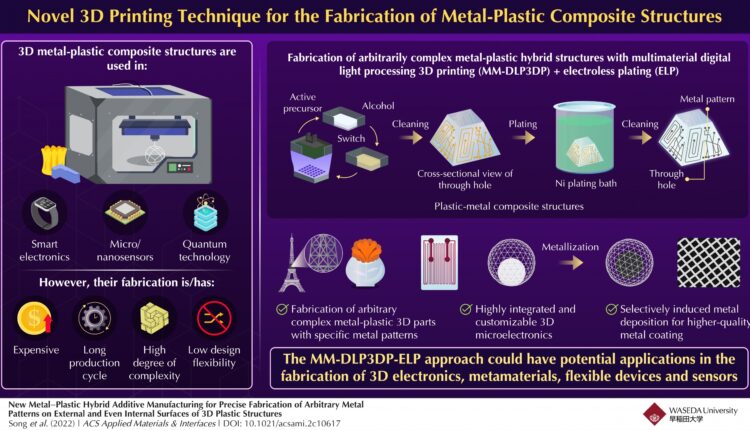 Due to its enormous potential in the production of next-generation electronics, research interest in the 3D printing of metal patterns on plastic components has increased exponentially in recent years. However, it is difficult to manufacture such intricate parts using conventional techniques. Researchers from Singapore and Japan have now created a new 3D printing method for creating complex-shaped 3D metal-plastic composite structures.

These structures give designers more design freedom and allow for the creation of increasingly smaller, more intricately shaped, and complexly featured devices.

However, the methods used to fabricate such parts today are pricy and difficult.

from Nanyang Technological University, Singapore explains the study’s inspiration: “Robots and IoT devices are evolving at a lightning pace.

As a result, the technology used to produce them must also advance. Although 3D circuits can be produced using current technology, stacking flat circuits is still a topic of active research. To promote the advancement and development of human society,

we wanted to address this issue by developing incredibly useful devices. The study was published in ACS Applied Materials & Interfaces.

The active precursors—chemicals that can be transformed into the desired chemical after 3D printing, as the desired chemical itself cannot be 3D printed—are first prepared in the first step of the multi-step MM-DLP3DP process. To create the active precursors in this instance, palladium ions are added to light-cured resins. This is done to support electroless plating, which is the process of forming a metal coating by the auto-catalytic reduction of metal ions in an aqueous solution. The next step is to create microstructures with nested regions of the resin or active precursor using the MM-DL3DP apparatus. Finally, these materials are directly plated, and ELP is used to add 3D metal patterns to them.

To demonstrate the manufacturing potential of the suggested technique, the research team produced a variety of parts with complex topologies.

These components featured intricate designs with multimaterial nesting layers, microporous surfaces, and teeny-tiny hollow structures, the smallest of which measured 40 m in length.

Additionally, the metal patterns on these components were extremely precise and controllable.

Furthermore, using active precursors to selectively induce metal deposition can result in metal coatings of higher quality.
According to Umezu, Song, and Sato, these elements taken together may aid in the creation of highly integrated and adaptable 3D microelectronics.

It is expected to be a breakthrough technology for the production of circuits.