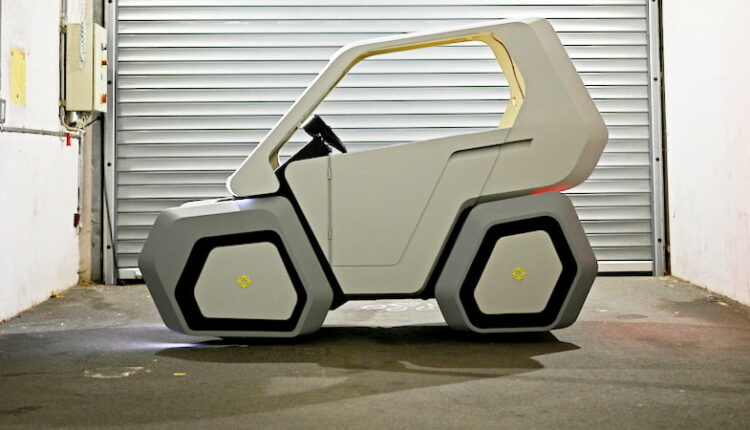 Ride to the future with Stratasys’s 3d printed electric bike

It’s a futuristic electric bike. And, thanks to Israel’s cutting-edge technology, it can be 3D-printed in an instant.

The unusual four-wheeler is part cargo bike, part electric vehicle (EV), and can seat two people, carry a 250kg load, and travel at a speed of 25km/h.

Contents hide
1 Innovation through advances
2 The Dreamchaser
3 The Uila
3.1 Related

Uila was created from the ground up by the German innovation studio nFrontier in just over three months.
However,

it would not have been possible without the advances made by Stratasys,

It provided the 3D-printing machines that allowed engineers to create prototypes in hours rather than weeks or months while waiting for specialist companies to turn their ideas into reality.

Stratasys creates, manufactures, and sells the machines, which resemble giant microwave ovens, for their clients to use wherever they are.

Unlike traditional 2D printers, which squirt ink onto paper, 3D printers squirt layers of polymer on top of each other, gradually shaping almost any design.
“It is not enough to simply have an idea. “You need to be able to do prototyping quickly,” Stratasys’ Yonatan Snir, VP Global Marketing, tells NoCamels.

“In this case, we were in charge of the body that surrounded the metal structure, the steering wheel, the chair, and everything else they needed to put inside to make it work.”

Any new product requires trial and error, but the ability to create a prototype in a matter of hours expedites the entire process.
“The entire cycle is faster,” Snir says.

.” We saw the challenge of shipping anything from anywhere to anywhere with COVID. You can do those cycles for yourself if you have the machines.

Stratasys used a technology invented and patented by the company’s founder, Scott Crump, in the case of the Uila.

He got the idea while making a toy frog for his young daughter with a glue gun loaded with polyethene and candle wax.

The resulting technology is currently being used to print parts for Dream Chaser,

a reusable spaceplane that will begin delivering cargo to the International Space Station in 2023.

Around 2,000 fixtures are being manufactured by Stratasys machines to secure the tiles that protect the vehicle from 1,650 C (3,000 F) temperatures when it re-enters the Earth’s atmosphere.
Closer to home, another advantage of 3D printing is the ability to customize any design.

A production line is designed for mass production of identical components, and cannot accommodate one-offs.

Behind an irregular hexagonal panel,

the futuristic Uila has regular hub-and-spoke bicycle wheels. A customer may prefer a square panel over a triangle.

or that they prefer it in red, blue, or a rainbow of colours.

The polymers used to construct the vehicle are also remarkably strong, lightweight, and easily recyclable.

The Uila has pedals like a traditional bike and a chainless electrical drive train that allows the driver to travel up to 70 kilometres on a single charge.
nFrontier, the company that designed the bike, hopes to have it licensed for use on German roads by 2024.

“We are proud to unveil Uila together with our partner Stratasys,” said Daniel Buening, the company’s CEO. Their technologies were at the heart of our prototype development and will be an integral part of our manufacturing process.” Uila, he said, is “a truly sustainable, game-changing mobility solution.”