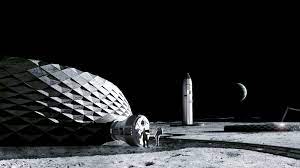 NASA has hired ICON to 3D print a lunar base

NASA awarded $57 million this week to a Texas-based company ICON that aims to 3D-print future lunar and Mars bases.

The Austin company ICON was awarded a five-year contract to develop construction methods for future roads,

and habitats made of lunar or Martian materials.

“We need innovative new technologies adapted to those environments,

and our exploration needs to explore other worlds,” Niki Werkheiser,

a director at NASA’s Space Technology Mission Directorate said in a statement.
According to NASA,

the grant is a continuation of an existing collaboration to develop construction methods that allow infrastructure to be built from lunar or Martian soil.

NASA is attempting to scale up its base construction technology to

“prove it would be feasible to develop a large-scale 3D printer capable of building infrastructure on the Moon or Mars,”

according to Corky Clinton of NASA’s Marshall Space Flight Center in Huntsville, Ala., when ICON received its first 2020 grant.

ICON has been working with NASA for the past two years to create prototypes for extraterrestrial bases using its proprietary large-scale 3D printing technology,

which it is also using to build a 100-home planned community north of Austin.

While ICON is best known for its work on Earth,

the company has been hoping to build in space for some time.

Project Olympus was first announced in 2020,

and the company plans to build a 3D-printed Mars colony one day.

rather than bringing a bunch of Earthly junk to the Moon’s relatively pristine surface,

— Moondust, broken rocks, etc.
If the Artemis mission schedule remains unchanged, ICON expects to have its Moon huts ready for NASA use by 2026.

If the Moon is to become a human outpost,

durable and lightweight lunar housing will be required

— a reality that ICON CEO Jason Ballard does not appear to dismiss.