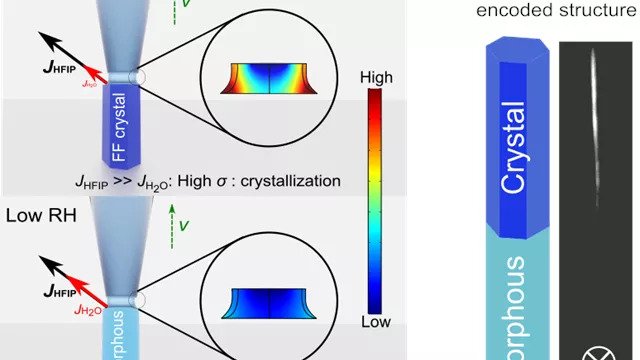 A team from the University of Hong Kong (HKU) has created a high-precision 3D printing technique to create brand-new 3D anticounterfeiting labels that are polarization-encoded.
The team claims that the new 3D label can encrypt more digital information than a conventional 2D

label. The team is led by Dr Ji Tae Kim from the Department of Mechanical Engineering at HKU.

The project was released in Nano Letters.

The team said that diphenylalanine (FF), a species of dipeptide,

was picked as a material for data encryption due to its distinctive optical properties.
According to Dr Jihyuk Yang from the Department of Mechanical Engineering at HKU,

the First Author of the paper:

“FF has long attracted considerable interest from neuroscientists due to its association with Alzheimer’s disease.

Due to its distinctive properties,

which result from its crystalline nature and include piezoelectricity and optical birefringence, FF is recently becoming a new material for electronic and photonic devices.

A tiny single 3D pixel can encrypt a multi-digit binary code made up of “0” and “1” by using the various responses of the amorphous and crystalline segments to polarized light.

A single eleventh-segmented freestanding pixel on a tiny 4 m2 area, which is 1000 times smaller than a hair strand, can increase the information capacity to 211, according to Dr Kim.

The global economy and security are at risk from counterfeiting.

The United States Patent and Trademark Office (USPTO) reported in 2020 that counterfeit and pirated goods’ annual value ranges from US$ 1.7 to 4.5 trillion.

Due to the limited data encryption capacity in a planar space,