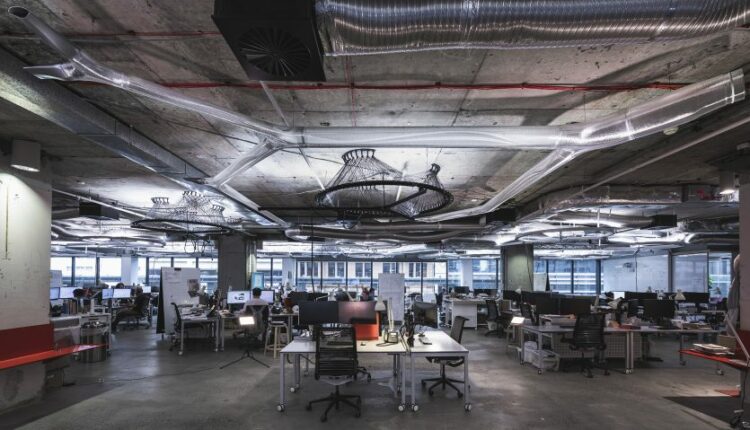 A low-carbon, 3D-printed system that “breathes” like frog skin has been developed by BVN and the University of Technology Sydney.

The Systems Reef 2 invention, so named because it was made from recycled plastic and 3D printed, has a design that, according to BVN,

has 90% less embodied carbon than a typical air-conditioning system.

Moreover, the system consumes less energy during operation due to the air flowing more easily around the organically shaped, branching tubing because there are no sharp corners.
The technology was created to address the many flaws that the architecture studio found in air conditioning,

which, according to co-CEO of BVN Ninotschka Titchkosky,

was “largely designed for manufacturing processes as opposed to human comfort” when it was first developed in the early 1900s.

Due to the typical use of steel sheets in air conditioning systems, which the BVN and UTS team’s analysis revealed results in high embodied carbon and the use of significantly more material than is required,

The systems also waste energy because they are difficult to modify after installation and structurally inefficient.
The systems we currently use are extremely rigid, not great for human comfort, extremely expensive to change, and severely restrict how we want to occupy buildings in the 21st century,

which is much more adaptable and agile, according to Titchkosky.

The fact that Systems Reef 2 is “designed for air” eliminates one of the primary causes of inefficiency in existing systems, right angles, making this a significant difference.

Despite being suitable for sheet metal construction,

these systems’ orthogonal designs cause air to get stuck in corners, requiring more force to push it out.

The most startling discovery,

is that most current air conditioning systems aren’t even aerodynamic and don’t even undergo a computational fluid dynamic modelling process.

Instead, Systems Reef 2 has a branched, asymmetrical shape with no sharp corners and a tapering profile so that less force is required to push cool air out of the tubing’s furthest reaches.

Since there is no longer any friction in the system,

The team took inspiration from frogs, which breathe through their skin,

to increase the comfort level of people sitting beneath the contraption. Systems Reef 2 was covered in tiny pores instead of ducts, which effectively misted cool air into the area below.

They selected recycled plastic as a low-carbon material option that is appropriate for 3D printing on the theory that not only is plastic waste abundant,

but it can also be easily recycled time and time again, resulting in Systems Reef 2’s circular design.

The 3D-printing robot at BVN was fed with hospital waste plastic that had been crushed into pellets.

Systems Reef 2 has a translucent, crystalline appearance that BVN describes as “very beautiful” thanks to the material. To add personality to an office setting, you could also print it in colour or illuminate it.

The team’s main aim for Systems Reef 2 was adaptability,

This was accomplished with a click-and-connect system that featured standardized fixings and seals to make simple changes possible.

Due to its simplicity and lightweight,

BVN estimates that it reduces onsite labour by more than 50%, which is advantageous given the global labour shortage.

Additionally, it is better for the installers’ health.

Are we on the verge of a 3D-printed house revolution?